Mickey Kaus is a very smart L.A. pundit whose Kaufiles was one of the original news blogs that mattered. He now writes mainly for the Daily Caller. In 1992, he wrote “The End of Equality,” a powerful book-length analysis of Democratic economic agenda and social programs that argued presciently that they would not stop the widening gap between the rich and the poor. He’s a liberal — he’s for nationalized health care. But he’s also what might be called a self-hating Dem. He thinks his party’s policies are often confused and poorly thought-out. 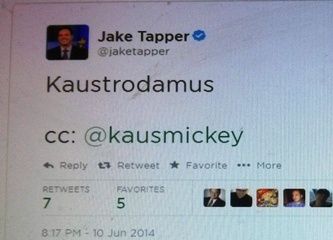 That’s why he has a unique niche in American journalism: He’s a liberal who relentlessly argues against tolerating illegal immigration or “comprehensive immigration reform” on the grounds that the last thing a nation beset by income inequality needs is a flood of inexpensive, low-skilled laborers.

This has led him to focus on House Republican leaders’ interest in “comprehensive immigration reform.” Here’s an example[1] excoriating House Majority Leader Eric Cantor as a secret champion of amnesty.

Overnight lots of folks began crediting Kaus[2] for helping obscure econ prof Dave Brat beat Cantor on Tuesday in a Virgina GOP congressional primary and for suggesting it was a real possibility when the conventional wisdom was that the powerful Cantor would cruise to a lopsided win. CNN’s Jake Tapper called him “Kaustrodamus.”

Brat against crony capitalism and bailouts

“Notes: 1) This is a pitch — against a ‘low wage agenda’ and ‘crony corporate lobby’ — that can appeal to Democrats as well as Republicans. Maybe partisanship will eventually be transcended, not at the top, with David Brooks, Gloria Borger and Jon Huntsman imposing a Beltway consensus they hammer out at an Atlantic panel, but at the bottom, where less sleek figures like Brat, Phyllis Schlafly and Jeff Sessions, can make common cause with Democratic workers who’ve gotten the short end of previous top-down triumphs such as global trade and Reagan’s 1986 amnesty, as well as of ineluctable technological trends like automation. 2) Perhaps not coincidentally, Democrats can vote in the Cantor vs. Brat primary. …

“Backfill: See also this earlier Brat release, which expands the potentially bipartisan anti-corporate agenda to other issues – like spending, debt and insider trading.”

One way or the other, Cantor’s loss shows there’s no such thing as a safe House seat anymore.