Tuesday’s historic[1] Vergara vs. California ruling was likened to Brown vs. Board of Education by none other than Rolf Treu, the judge who issued the decision. But has anyone noticed how quiet Latino Democrats are about the ruling, outside of Antonio Villaraigosa and Gloria Romero? I asked Assemblywoman Lorena Gonzalez on Twitter[2] on Tuesday evening what she thought. She said she would get back to me but never has.

In the meantime, however, we’re seeing some hilariously Orwellian comments from the head of United Teachers Los Angeles. This is from the L.A. Times[3]: 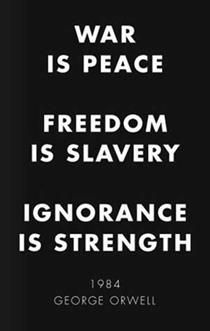 “This decision today is an attack on teachers, which is a socially acceptable way to attack children,” said Alex Caputo-Pearl, the president-elect of the Los Angeles teachers union. Instead of providing for smaller classes or more counselors, “you attack teacher and student rights.”

Up is down, left is right, right is wrong, teachers=students.

Oh, my. George Orwell long ago predicted in his novel “1984” that political speech would become this outrageously manipulative — this baldly, weirdly dishonest.

Remember, Alex Caputo-Pearl is the head of the United Teachers Los Angeles. This is the same CTA chapter that got the Los Angeles Unified School District to approve the rules that prevented Miramonte Elementary School teacher Mark Berndt from being immediately fired after evidence emerged that he had fed his students semen.

If attacking teachers is a way of attacking students, what is a teacher feeding semen to a student? A teacher who can’t immediately be fired for this? A teacher whom school district officials believe they can’t remove from the payroll unless they pay him $35,000 first?

If Alex Caputo-Pearl has a response, I’ll let everyone know.