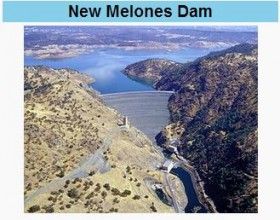 Has California built any dams in the past 55 years as its population has more than doubled – and as a drought rages? Yes – but not by the state.

Peter Gleick of the Pacific Water Institute recently stirred the waters about whether California has added any new water storage dams since 1959. The title of his article in the San Francisco Chronicle, “The Number of New Dams Built in California in the Past 50 (or 40, or 30, or 20) Years is Not Zero[1].”

Gleick is correct that five new dams were built in California since 1959 with a total capacity of 8.6 million acre-feet of water. However, we need to distinguish.

No water has been added to the State Water Project or federal Central Valley Project for farms and cities. The State of California has built no new dams since 1959.

However, the federal government and three local water districts have built the five dams Gleick mentioned.

The five dams are irrelevant because they do not effectively produce more water for the State Water Project and the federal Central Valley Project that provide water to cities and farms. Both the state and federal water systems depend on the largest reservoir of the Sierra snowpack that holds 15 million acre-feet of water[2].

So, while Gleick’s “not zero” is correct, it also could be calculated as “not much more relevant than zero.”

The dams listed by Gleick include:

The New Melones Dam,[3] with a capacity of 2.4 million acre-feet of water storage, is the United States’ first “green dam.”[4]  It was re-built in 1978 by the federal government.  It is no longer able to meet its original obligations to provide flood control protection and agricultural irrigation except in a rare wet year.  All of the water in the dam is now required only for fish flows during normal years. Rep. Jeff Denham, R-Modesto, has attempted without success to get as little as 100,000 acre-feet of water dedicated for agricultural irrigation.

Warm Springs Dam[5] in Sonoma County was built in 1983 and holds 381,000 acre-feet of water.   The U.S. Bureau of Reclamation operates the dam for flood control and fish flows; and for agricultural irrigation operates when enough water is available.  Warm Springs Reservoir is not counted[6] on the list of state and federal reservoirs for water storage purposes as it serves only Sonoma County.

The New Spicers Meadow Dam[7] was built by the Calaveras County Water District in 1989 and holds 189,000 acre-feet of water.  It diverts water from the Stanislaus River that flows into the San Joaquin River and ultimately the Sacramento Delta.  The purpose of the reservoir is to provide drinking and agricultural water as well as hydro-power to Stanislaus and Calaveras counties only. Since it diverts water from the Delta, the State of California does not count[8] it as contributing to water storage.

Los Vaqueros Dam and Reservoir[9] was built by the Contra Costa County Water District in 1998 and holds 160,000 acre-feet of water solely dedicated to serving Contra Costa County.  The reservoir was built because during dry years water from the Sacramento Delta became salty.  The reservoir is also not counted[6] by either state of federal authorities for water storage purposes.

Diamond Valley Lake[10] is an 800,000 acre-feet off-stream reservoir located in Riverside County in Southern California.  The Metropolitan Water District of Southern California built it in 1995.  It is also not counted[6] as contributing to statewide water storage. It is a backup reservoir that holds surplus water for droughts and emergencies for Southern California only.  The reservoir is connected to the State Water Project by the 44-mile Inland Feeder[11] pipeline.  Diamond Valley Lake only takes water from the State Water Project when surplus water is available for storage for future use.