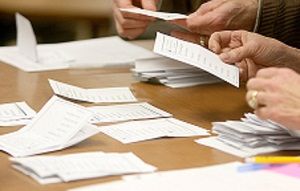 [1]As more Californians turn to absentee voting, election officials have seen an uptick in the number of potentially valid ballots that aren’t being counted.

That’s because, under state law, ballots must be received by the local registrar of voters by Election Day, not postmarked that day or en route to an elections office.

“California doesn’t have the infamous hanging-chad or butterfly ballot,” Paul Mitchell, vice-president of Political Data Inc., wrote in a recent op-ed piece[2] in the Sacramento Bee. “Piles of ballots are marked ‘too late’ because the mail arrived after Election Day.”

Sacramento County Registrar of Voters Jill Levine, who has been tracking the number of “too late to count ballots” statewide, estimates that as many as 20,000 otherwise valid ballots in the June 3 primary were received too late. With more than 4 million ballots counted so far, these “too late to count” ballots make up less than half a percent of total votes cast statewide.

“The only thing worse than not voting is people trying to vote and having their ballots go uncounted,” Kim Alexander, president of the nonprofit California Voter Foundation, told the Associated Press[3].

Controller’s race could be decided by few hundred votes

Most races, especially at the statewide level, are decided by a margin of hundreds of thousands of ballots. But this year’s “too close to call” race for state controller [4]could come down to just a few thousand, maybe even a few hundred, votes statewide.

“In some cases we are seeing one to one-and-a-half percent of the ballots being late,” Mitchell told KPCC[5]. “And we’re looking at a controller’s race that right now is separated by eight-one-thousandth of a percent.”

As of Monday, June 23, Republican Ashley Swearengin [6]has secured the top spot in the November run-off, in which only two candidates will be on the ballot. So that spot is not at issue.

For the second spot on the ballot, Board of Equalization member Betty Yee[7] leads Assemblyman John A. Perez[8] by 843 votes, a margin of two hundredths of one percent [9](0.02 percent). Both are Democrats.

The outcome is likely to decided by Lake County, which holds 83 percent of the state’s unprocessed ballots from the June 3 primary.

But does it matter?

But for all the legitimate concerns about the principle of any valid votes being discounted, could the “too late to count” ballots decide the outcome of an election? The current race for state controller, which is projected to be the second closest race in California history, is the perfect test case.

KPCC assembled a list of the ten counties with the most “too late to count” ballots. These counties account for roughly three-quarters of all late ballots in the state, according to the preliminary figures. With the overall election results for each county, CalWatchdog.com can project how those votes would have gone. To be sure, this is an imperfect projection.

The Top 10 counties are split right down the middle — Perez beat Yee in five, Yee beat Perez in five. The chart below shows how many votes Perez or Yee would have gained over their opponent in each county.

The overall projected vote difference: Perez would have gained another 76 votes, if those late ballots were counted. But as of the current statewide count, that still would not be enough to overcome Yee’s current 843-vote margin.

Again, that’s an inexact estimation based solely on geography. There are other factors to consider, such as race, age and political party, all of which could produce a more accurate projection and show that the late ballots disproportionately affected one of the state controller candidates more than the others.

Mitchell’s firm, which conducted an analysis of the “too late to count” ballots from the 2013 Los Angeles city election, found late votes were tied to the postal routing system. San Fernando Valley voters, whose mail is processed in Santa Clarita, had a greater chance[10] of seeing their vote arrive later than those in downtown.

In its analysis of the 2012 election, the state’s leading election data firm found that more than 30,000 voters statewide had their ballots invalidated because they were too late to count. Half of these voters were under the age of 30, according to Political Data Inc[11].

You can expect another analysis of this election’s late ballots, which could shed some light on whether John Perez or Betty Yee would have been helped by those ballots. That’s after Lake County finishes its count, Secretary of State Debra Bowen certifies the final election tally, and we go through a grueling recount.

Until then, just like the results itself, it’s just too soon to know whether those projected extra 76 votes would have made the difference.