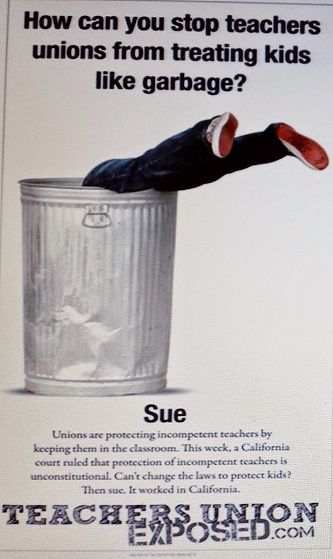 When Asian-American lawmakers objected to efforts by black and Latino lawmakers to gut Proposition 209 and bring racial quotas back to college admissions and other state government programs, the California media thought that was news. Nexis shows 85 stories about the proposed changes to Prop. 209 in the past six months. This L.A. Times piece[1] from May analyzed how the rift developed. Here’s the Associated Press piece[2] from January that first brought national attention to the issue.

Now we have a landmark court ruling that portends another, even more consequential rift between California Democratic factions. The Vergara vs. California decision posits that state policies which protect mostly white veteran teachers and funnel the worst teachers to schools in poor minority neighborhoods are an unconstitutional affront to equal protection laws. The judge explicitly likened his ruling to Brown vs. Board of Education, the 1954 U.S. Supreme Court ruling that “seperate but equal” public school systems were unconstitutional.

This puts the Democratic coalition at great risk. Its most powerful members — the CTA and the CFT — are accused of orchestrating an assault on the interests of the children of blacks and Latinos — its most loyal voters.

Politicians on a hot tin roof

I wrote about it in a Sunday editorial[3]. Notice how the Latino lawmaker I got a comment from — Assemblywoman Lorena Gonzalez — tries to finesse the implications of the Vergara decision.

“The Vergara decision represents a new challenge to those of us who support both the civil right of every child to a quality education and the original intent of teacher tenure which protects academic freedom and provides basic worker protections of due process for education professionals,” the San Diego Democrat wrote in an email.

“Should the decision be upheld on appeal, the Legislature will have to develop a new legal paradigm to protect both students and teachers. I look forward to participating in those discussions.

“In the meantime, I will continue my efforts to hold the California Department of Education accountable for its failure to protect the rights of English language learners. This failure highlights that there are problems in civil rights protections for students that have negative consequences for far more children than teacher tenure.”

So Latino students’ civil rights have indeed been violated. But it’s not the CTA or the CFT’s fault. It’s the California Department of Education that must be held “accountable.” Wow, that’s a stretch.

Why aren’t the Sac Bee, the LAT or the Bay Area News Group interested in this angle?

Why don’t Dan Walters or Dan Morain or any beat reporter covering the state government think this is juicy stuff?