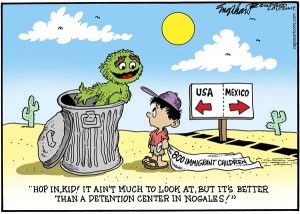 Will they or won’t they?

After forming quick — some say stealthy — plans to hand California some 300 undocumented immigrants detained in Texas, the federal government has reversed[1] that decision, only to leave open the prospect of changing it back yet again.

The uncertainty underscores a surprising level of unpreparedness for the kind of illegal immigration now dominating headlines, which includes especially high numbers of children. Complicating the bureaucratic problem even further, many of the children are unaccompanied.

In recent years, illegal crossings at the U.S.-Mexico border have been on a historic downturn, with border apprehensions at or near all-time lows. Unauthorized child immigrants, however, began increasing in number three years ago. As USA Today reports[2], federal authorities now say that since October 2013, over 52,000 children have been caught in illegal border crossings; prior to 2011, that figure stood at just 7,000 a year.

Notably, the number of apprehended children excludes those who crossed the border accompanied by parents or other adults (and, of course, those who haven’t been caught, whether because their journey was successful or ended in death). Since the October surge, authorities have snared over 39,000 adults with young children. As the Washington Post reports[3], some among that group have been released, but the Department of Homeland Security won’t give any detailed statistics — or even reveal whether any among that number simply failed to appear in immigration court.

Circumstances are cloudy surrounding the Border Patrol’s plans to transfer to California the 300 detainees, most of whom are families with children. Described[4] by Customs and Border Protection spokesman Ralph DeSio as a “thing” in a “very fluid state,” federal decision-making appeared to change in the face of local opposition to the flight scheme in the San Diego area.

Although only a small group of no more than a few dozen citizens turned out for a Temecula protest decrying the transfer plan, they earlier found an audience in Rep. Ken Calvert, R-Corona. After meeting with the protestors last week, Calvert released a statement echoing their concerns. He said[5], “It is simply outrageous and completely irresponsible for the Obama administration to transport illegal immigrants to facilities, like the Murrieta Border Patrol Station, that are not equipped or prepared to handle them.”

The Murrieta station seems to have been considered specifically as part of the Border Patrol’s search for accommodations adequate to detain families with children. Part of the confusion stems from the complex of bureaucratic authorities involved in such a process. Immigration and Customs Enforcement, for instance, chooses which families are detained and which are released — not Customs and Border Protection.

Yet ICE only counts among its physical assets one detention center designed for families, according[6] to The Washington Post. Boasting just 85 beds, it is located in Pennsylvania, far from the U.S.-Mexico border.

A family-specific detention center over seven times that size is in the works at an Artesia, New Mexico location. But the Post reports[3] that Rep. Steve Pearce, R-New Mexico, has revealed even this location would not be able to house unaccompanied minors.

In a clumsy move that drew[7] howls from Arizona Gov. Jan Brewer, border agents flew some 400 families with children detained in Texas to Tucson, where ICE took them into custody. But ICE officials then ran busloads of detained families to the Tucson Greyhound station — switching to the bus line’s Phoenix station only when the Tucson location had been overrun with the would-be immigrants, who had not been given any food or child care supplies.

“State and local governments, law enforcement agencies, health care providers and nonprofit organizations are all stretched to the breaking point attempting to manage the enormity of these challenges,” Brewer wrote[8], in a fiercely-worded letter to President Barack Obama.