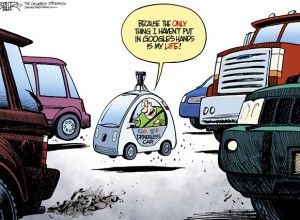 California drivers could be just a few years away from having “black boxes” in their cars tracking their travel and taxing them for every mile driven. Senate Bill 1077[1] is by Assemblyman Mark DeSaulnier, D-Concord, and would require a mileage tax pilot program to start up by 2016. It recently passed the Assembly Transportation Committee.

Proponents argue that a mileage tax is needed because California motorists are using less gas than in the past because cars are more fuel efficient, reducing much-needed revenue from the 36-cents-per-gallon fuel excise tax. Opponents are concerned about the potential loss of privacy when governmental agencies track Californians’ travel.

Aware of that concern, SB1077 requires a 15-person task force to implement a mileage tax pilot program that takes into consideration “the necessity of protecting all personally identifiable information used in reporting highway use,” according to the committee’s legislative analysis[2].

Bill author DeSaulnier[3] cited a California Transportation Committee study[4] in explaining the need for his bill to the committee on June 23.

California is “$295 billion short on the operations and maintenance of our existing transportation infrastructure,” he said. “And that’s just for the remainder of this decade. So as the gas tax continues to go down, largely because of the efficiency of our fleet and more efficient cars get out, we know that we are approaching pretty quickly a fiscal cliff when it comes to transportation.”

DeSaulnier said a mileage tax needs to be studied.

“The study specifically needs to deal with individual privacy issues, equity, technology, costs and consequences of various potential options available,” he said. “So when we look at different options, this would just be one.”

Will Kempton, a former Caltrans director who is now executive director of Transportation California[5], an advocacy group, agreed that an alternative to the gas tax must be found.

“We’re vitally concerned about gaining more revenues for the transportation program given the needs that have been identified in some of the recent studies,” he said. “The gas tax has been the major funding source for transportation for several decades, but it’s no longer carrying the weight of that charge.

“It looks like the mileage-based fee is an approach or mechanism that has some promise. It’s certainly being talked about across the country at the national level. And we know that several states on the West Coast are taking steps to move more rapidly toward implementation of a user fee of this nature. The Oregon model, I think, is one of the best that we can look at in terms of how we might approach this issue in California.”

Oregon, which has conducted three pilot mileage tax programs over the past decade, plans to launch an actual mileage collection system next July. Five thousand volunteers will be paying 1.5 cents per mile, then receiving a refund of the gas tax they also paid during the year.

“Motorists will then drive and periodically receive a bill by mail or email – their choice – that may be bundled with other value added services. A motorist’s bill will contain a charge for distance driven, an automatic fuel tax credit and a net amount to pay. Motorists may check the bill details and pay online or by mail or authorize automatic payment from their smartphone, tablet device or the connected vehicle console in the dashboard of their car.”

To prevent charging Oregon motorists for travel outside of Oregon, the mileage meter would likely contain GPS tracking capability.

“The greatest concern of both the public and the commissions was protection of privacy,” the plan states. “It did not matter that ODOT built protections into the GPS-based mileage reporting devices used in the pilot to prevent them from tracking vehicles. The public simply did not believe that the protections could ever be guaranteed to work.

Motorists also don’t want the government “choosing a box” that would be placed in their car, according to the plan. “The public did not want a government agency forcing any particular technology upon them.”

They are more open to the mileage tax, however, if they are provided choices on “the method of reporting, from whom they acquire the mileage reporting device and to whom they report the information.” Details are still being worked out, but Oregon plans to provide those options.

No witnesses spoke in opposition to SB1077 at the Assembly transportation committee hearing. But concerns were raised by several Republican committee members and one Democrat.

Marie Waldron[8], R-Escondido, provided one of the four committee votes against the bill (it passed 10-4).

“There’s a lot to get something like this set up,” she said. “A couple of the concerns are creating a new revenue stream on the backs of vehicles again, and the issue of privacy of people’s data. It’s one thing to look at how many miles a vehicle is going. But it’s another thing when you’re getting into where people are going, what roads they are using, things like that, is a concern to me.”

Also voting against it was Eric Linder[9], R-Corona.

“I think it’s very invasive,” he said. “But I think that something good is coming out of this in that the discussion is being moved forward as to how we plan to deal with the $300 billion transportation fiscal cliff or just flat out financial crisis that we are dealing with as far as transportation maintenance is concerned.”

“If you’re traveling in a Ford Focus or Chevy Suburban – same mileage but one is much lighter than the other, putting less maintenance [requirement] on the roads than the other – how are you going to address that?” he asked. “What happens to those who make a living by traveling, like taxi cab drivers? What does it do for rental cars and tourists coming to California to rent and travel and pay?”

Jim Frazier[11], D-Oakley, who represents a district on the eastern edge of the Bay Area where many of his constituents have long commutes, declined to vote on the bill.

“I know we have measures already in place like the truck weight fee that we tried to recapture this year,” he said. “And we do have gas tax that is actually helping balance the budget. I would think that our efforts would be something that’s already originated that we could actually capture and create our mini-stimulus going forward at this point.

“Everybody wants to have more money for these projects. [But] if we are going to go out and spend $10 million on a study and the public won’t accept [a mileage tax], then I think we are just kind of putting the cart before the horse.”

But Committee Chairwoman Bonnie Lowenthal[12], D-Long Beach, is on board with a mileage tax, having sponsored a resolution in 2011 to urge Congress to adopt one at the federal level.

“I think this is a really important bill,” she said. “In my five years as chair of transportation we have been talking about this [funding deficit]. Everyone in this room has to understand the abysmal condition of some of our roads and that we don’t have the money to pay for it. I know we need to do something about the declining gas tax revenue.

“We need to look at this now. I understand very well the privacy issue. But we don’t have any more time. We are going to lose billions of dollars in lost excise tax revenue as fuel efficiency continues to improve – which is a good thing. Finding an alternative to the gas tax is no small matter. It won’t be cheap if we do it right. And we have to do it right.”

While California’s population grew 6 percent from 2005 to 2013, California motorists’ annual gasoline usage declined by 9 percent to 14.4 billion gallons, according to Board of Equalization statistics[13].

That’s due not only to more fuel-efficient vehicles, but also to the Great Recession reducing the number of cars on the road and a doubling of gas prices in the past decade leading to people taking shorter trips, according to a BOE report[14].

A 1-cent-per-mile tax would raise about $3.3 billion in California and create 59,000 construction-related jobs, according to a Transportation California study[15] in July 2012.

SB1077 will next be considered by the Assembly Appropriations Committee.