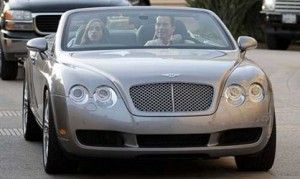 Despite its motto, “Advancing Policy, Not Politics” — as if the two could be separated — the USC Schwarzenegger Institute[1] still promotes the former governor’s policies on global warming/climate change. A recent press release reads:

“You only need to look at the decades of scientific research and at the epic droughts and superstorms to know that we can’t wait any longer to take action on climate change.”

And of course Arnold still supports imposing AB 32[2], the Global Warming Solutions Act of 2006, which he signed into law to reduce global warming that now clearly is known not to exist[3].

Yet Arnold himself, personally, still tools around in gigantic cars. Most recently he was photographed in a massive Hummer[4]. It’s not clear if this was the hygdrogen-powered Hummer Arnold once shared with GM[5] before it went bankrupt and canceled the marque.

And as I have noted,[6] Arnold also drives massive, gas-buzzing Mercedes and Bentleys.

Yet he drives gas-guzzling dinosaurs, while jetsetting around the globe promoting his global warming/climate change schtick to make him feel important among the rich and famous.