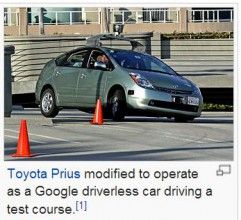 On July 4 on our site, James Poulos wrote [1]about Uber and other ride-sharing companies’ battles with some existing taxi companies over insurance. Steven Greenhut also wrote about it[2] in the U-T San Diego.

However that turns out, Uber almost certainly is the future for a simple reason: Digital technology ends up taking over every industry it advances into. Examples: books, newspapers, music, design, engineering, retail. Soon: K-12 education, universities.

A sign of Uber’s future is its hiring this week [3]of top Apple engineer Chris Blumenberg:

“Blumenberg is a 14-year veteran of Apple, initially working on Safari for OS X and later iOS. He famously built a version of Maps for iOS in just a few weeks in late 2006 so that Steve Jobs could demo it at the iPhone introduction in January 2007. For the last six years, Blumenberg has managed the Maps Apps & Frameworks group, overseeing a team of at least 40 employees handling Apple’s Maps apps on iOS and OS X. From his LinkedIn profile:

“My team is primarily responsible for the Apple Maps app and the MapKit framework. Since 2006, we’ve worked on a number of Google and Apple service-backed features such as local search, directions, street view, next destination and CarPlay. I proudly drove and guided the implementation of vector maps, Flyover and navigation during the shift from Google’s services to Apple’s services in 2012.”

Taxi companies should have adopted Uber-type technology long ago. But they didn’t. Instead, they depended on their political connections to keep out new competition so prices could be kept high. Examples: I recently took a 2-mile cab ride in Huntington Beach and it cost me $16. A 10-mile ride to John Wayne Airport cost $40.

The taxi companies couldn’t adapt to the digital age any more than could Borders Books, Tower Records or the Rocky Mountain News[4]. My own industry, newspapers, especially has been devastated.

It’s called progress. And as computing power continues to double every 12 to 18 months, the digits are going to be invading ever more industries — and government itself. When computers can teach your kids as well as humans, government schools will become obsolete.

And when driverless google cars become a reality, you’ll be able to punch up a ride on your smart phone and be whisked to your destination for a fraction of the current cost of a cab.