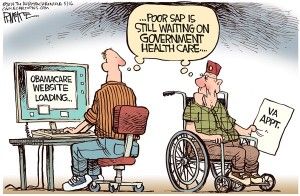 The Democratic Party just backed Proposition 45, which would give the state insurance commissioner vast new powers to regulate medical insurance rates. According to the Bee[1], the initiative pits “trial lawyers and consumer groups against doctors and hospital groups.”

According to R Street[2], “Such a system already exists in the property and casualty market as a result of the infamous and lamentable Proposition 103.”

The endorsement makes sense. If it passed, Prop. 14 will chase some health-insurance companies out of California because the price controls will make them unable to make a profit. That will cause many people to rush into Obamacare/Covered California, making it finally seem to be a “success.”

And the state will take one more step toward the single-payer, socialized medicine, Soviet-North Korean-style scheme Democrats have backed for decades.