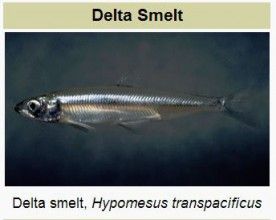 On June 13, a coalition of sports fishermen and Northern California groundwater users sued to stop water sales to the parched Central Valley. They contended conveying water through the Delta would kill Delta Smelt fish.

Moreover, the seasonally shifting mixing zone where fresh and brackish water meet in the Delta in which the smelt thrive would not be in the center of the Delta, as the plaintiffs’ experts contended.  During the winter, the smelt migrate upstream seeking the “first flush” of cold snowpack water.

What brought the lawsuit is the U.S. Bureau of Reclamation’s planned transfer of 175,226 acre-feet of water from the Shasta Reservoir to the San Luis and Delta Mendota Water Authority in the epicenter of the current historic water shortage.

At issue are “groundwater substitution transfers,”[2] whereby reservoir water is transferred from Northern California to the Central Valley and thus has to be substituted with groundwater resources by Northern Californians.  A groundwater substitution transfer[3] is not a water grab; it is a willing buyer-willing seller transaction.  Thus far, the SLDMWA has completed 10 water transfers this year[4], comprising 60,000 acre-feet of water, from willing sellers in the Sacramento River Valley to make up for the zero water allocation from the BOR this year.

Biologists say smelt not in delta in summer

Two consulting biologists were retained by the BOR to review biologist Tom Cannon’s report asserting conveying warmer water through the Delta during drought would be lethal to the Delta Smelt.  Biologist Frances W. Brewster[5] said:

“[The] arguments make no sense to me.  1. They claim there will be higher mortality due to higher temperatures at 3-Mile Slough. … That claim is not supported by the data. [The] difference in temperature is insignificant. The claim there will be increased entrainment[6] (trapping of fish in screens and pump intake structures) is so low based on historic data.”

“Similarly, I would not expect the proposed water transfers to have any effect on the LSZ (Low Salinity Zone) foodweb.  Most of the smelt population now resides in the Sacramento Deepwater ship channel. … The ship channel is thermally stratified during July-Oct … [and] remains below 23 C (Celsius) during summer-fall.”

The Deepwater Ship Channel[8] extends 43 miles[9] from Sacramento to the San Francisco Bay, northerly of the Delta.

Sportsfishermen not good sports about decision

Bill Jennings[10] of the California Sportsfishing Protection Alliance responded: “We’re extremely disappointed in the decision and will now decide our next steps. Contrary to the decision, Delta Smelt are at severe risk.”  CSPA member Dan Bacher attached a bar chart[11] showing that smelt have decline from 375 in 1998 to almost negligible levels in 2014.

However, in the 2010 Delta Smelt court case filed by the Coalition for a Sustainable Delta, Judge Oliver Wanger[12] ruled similar science was “sloppy” because the smelt were scattered in schools of fish throughout the Delta.

The National Resources Defense Council [13]appealed to find a different judge and in March 2014 got portions of Judge Wanger’s ruling reversed.

The 2010 Smelt court case[14] caused the “court-ordered drought” that lasted from 2007 to 2010 due to court injunctions on deliveries of water to farms and cities until a court decision could be obtained.

But if it wasn’t for water markets, they might not be getting any water at all this summer.