I still remember in wonderment watching the Apollo 11 moon landing on TV 45 years ago this week. Here’s what we saw, as Neil Armstrong stepped foot on the lunar surface:

A great deal of the Apollo 11 program was made right here in California. The second stage[1] of the giant Saturn V rocket was made by North American Aviation in Seal Beach.

But the most important contribution was the mini-computers using Silicon Valley-made circuits. It’s often said that the Apollo program “drove” technological innovation in micro-computers, an argument used to justify other government industrial policies and spending. In fact, the opposite is the truth.

In his essay, “Two Young Men Who Went West,” included in the “Hooking Up” book, Tom Wolfe wrote, “People were beginning to talk about all that the space program was doing for the computer sciences. [Fairchild Semiconductor’s Robert] Noyce knew it was the other way around.”

Moore’s Law[2], which has been backdated to the 19th century, also refutes the contention that government spending promotes innovation. No matter whether government spending has gone up or down, computing power (or pre-computer electromechanical and vacuum tube calculation power) has doubled every 12 to 18 months: 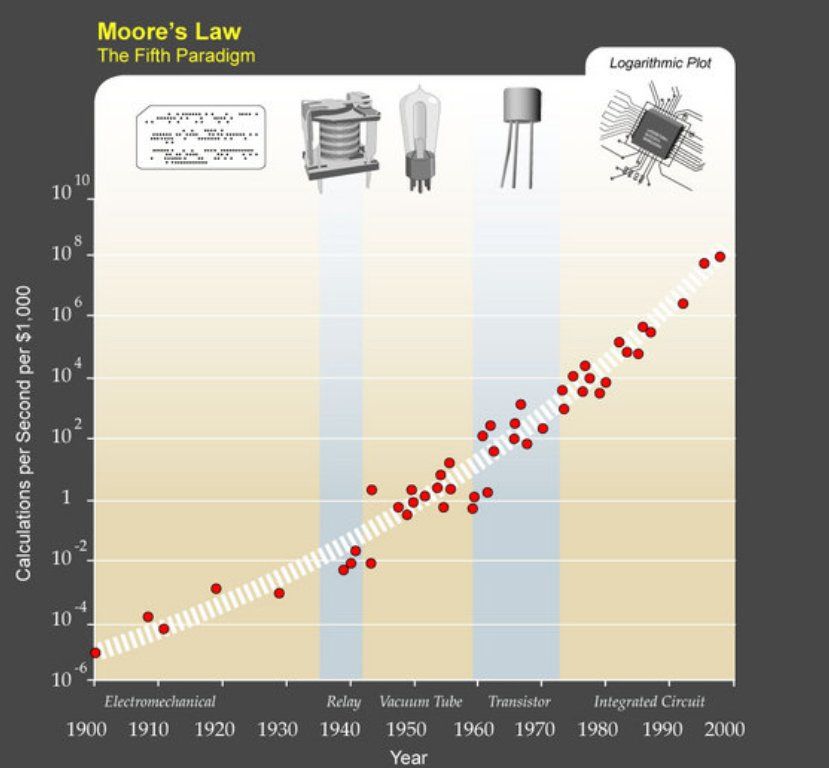 Given my current views, if I had been in Congress in the 1960s, I would have voted against the funding for the Apollo program, which totaled $24 billion over a decade — about $500 billion in today’s money.

At the time, Amercians thought we were so rich we could “have it all”: the Vietnam War, the Great Society welfare programs funding the War on Poverty, the Apollo program. Things broke down financially in the 1970s with “stagflation”: stagnation plus inflation.

But landing on the moon: What an adventure!

A surprising number of Americans believe the Apollo missions were faked in back lots in Hollywood.

And these people get to vote.