On Jan. 11, 2010, the Legislative Analyst’s Office issued a report on the latest iteration of the business plan for the California High-Speed Rail Authority. It contained a game-changing conclusion — a predictable conclusion but still a crucial one. Here’s what I wrote in a Union-Tribune editorial at the time:

The Legislative Analyst’s Office released a terse analysis that depicted the latest business plan as vague, unsubstantiated and not credible – and then concluded with this bombshell:

“The Proposition 1A bond measure explicitly prohibits any public operating subsidy. However, the plan … assumes some form of revenue guarantee from the public sector to attract private investment. This generally means some public entity promises to pay the contractor the difference between projected and realized revenues if necessary. The plan does not explain how the guarantee could be structured so as not to violate the law.”

In an e-mail, a spokesman for the California High-Speed Rail Authority, Jeffrey Barker, said the authority was responding to the criticism by putting together a business plan that “does not require government operating subsidies” and could comply with the wording of Proposition 1A by offering private investors a “ridership guarantee” instead of a “revenue guarantee.”

But a ridership and a revenue guarantee are the same thing because ridership times ticket price equals revenue. The Legislative Analyst’s Office told us yesterday that it agrees.

That’s been the giant fundamental obstacle ever since to the $68 billion bullet train project getting substantial private investments.

Meet the latest journo to fall for the CHSRA spin 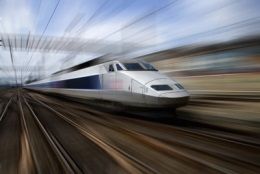 Nevertheless, ever since then the bullet train folks have periodically gotten reporters around California to write stories about the much-improved prospects for private investment. The latest example came over the weekend, when Jessica Calefati of the Bay Area News Group managed to write a long article[1] about, yes, renewed hopes for private investment without even mentioning the LAO-cited obstacle. Sheesh.

SACRAMENTO — On life support just a few months ago, California’s bullet train has been resuscitated.

Last week, demolition began in Fresno to clear the way for the first stretch of track. More significantly, private investors across the country and abroad are expressing new interest in bankrolling part of the $68 billion project.

The lawsuits that have stymied the plan aren’t yet resolved, but a budget agreement brokered by Gov. Jerry Brown that guarantees the San Francisco-to-Los Angeles rail line its first funding stream — one that leading economists say could reach about three quarters of a billion dollars annually — has emerged as a “game changer,” high-speed rail experts say.

Inking a deal that will send the project hundreds of millions of dollars a year in fees collected from polluters is the signal the private sector was waiting for, according to formal letters of interest the state received last month. With only a fraction of the project’s funding in hand, the state needs private investment for about one-third of the final price tag to have any hope of completing the rail line.

In the past, rail authority officials have tried to confuse reporters by citing construction and project management companies’ interest in being contractors on the multibillion-dollar contracts that will be given out if the project goes forward as being tantamount to interest in investing it. Of course private companies want to get big contracts. That doesn’t mean they’re investors.

Dumb, de dumb dumb: That is just what’s happened again. Look at this paragraph from the BANG story:

But it’s significant that Vinci Concessions, a French company that is considered a world leader in developing highly technical high-speed rail projects, is one of the nine companies that eagerly wrote to California about the bullet train last month.

It’s something the company makes clear in its key pitch:

VINCI Concessions is the leader in almost every joint venture it establishes and has demonstrated its ability to attract long-term investors.

It’s not the investor. It’s the allegedly shrewd project manager that allegedly can attract investors.

They can’t cite any — because as the LAO noted 54 months ago, revenue and ridership guarantees are illegal under state law. And no private investor wants to partner with California without such guarantees.

I hope James Fallows, the respected East Coast journo who has come out as a CA bullet-train fan[4], sees this rank manipulation by the rail authority for what it is: confirmation he shouldn’t trust the rail authority.