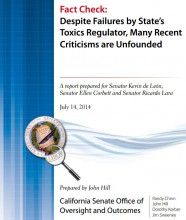 The shoe’s on the other foot for Consumer Watchdog (no connection to CalWatchdog.com).

Routinely critical of state regulators for failing to protect consumers, the consumer advocacy group has been criticized by an independent oversight panel for presenting “incorrect” and “misleading” information to the public.

A 2013 Consumer Watchdog expose was titled, “Golden Wasteland[1]: Regulating Toxics, or Toxic Regulations?” It slammed the state Department of Toxic Substances Control for jeopardizing public safety by “allowing serial polluters to cut deals with the department” and “levying wrist-slap penalties instead of applying maximum fines.”

“We have some of the toughest environmental laws in the nation, and some of the weakest enforcement,” Consumer Watchdog concluded, based on its 2013 Golden Wasteland report[2].

A new report by the California State Senate’s Office of Oversight and Outcomes, “Fact Check: Despite Failures By State’s Toxics Regulator, Many Recent Criticisms are Unfounded[3],” analyzed claims made by Consumer Watchdog.

Led by former Sacramento Bee reporter John Hill, the Senate investigative unit conducted a line-by-line review of Golden Wasteland. They “found that the report was incorrect, misleading or lacking in context.”

“Golden Wasteland includes opinions and proposals in addition to factual assertions,” the Senate’s investigative unit found. “In some cases, we were able to confirm its assertions. In many others, we found that the report was incorrect, misleading or lacking in context.”

One example of a misleading claim cited by Senate investigators involved whether the Department of Toxic Substances Control had jeopardized the public by failing to shut down an oil-recycling facility in Newark, California.

“One private environmental attorney says that the California Legislature never intended for the DTSC to allow serial violators like Evergreen Oil to stay in business,” Consumer Watchdog argued in its report. “In fact, the law does not require a specific level of harm to be determined before revoking or denying permits. … Thus, DTSC has every right – indeed a duty – to shut down this serial environmental polluter.”

“It’s true that DTSC had the legal authority to become more involved in the Evergreen case,” the Senate report states. “But Golden Wasteland fails to mention that California’s regulatory scheme calls for a local entity, a Consolidated Unified Program Agency, to take the lead in the section of the Evergreen plant where accidents occurred. … And the report misleads by omitting any mention of the Alameda CUPA’s lead role in overseeing the re-refining part of the facility, making it seem to an uninitiated reader that DTSC was the obvious candidate to respond to problems at the facility.”

Consumer Watchdog responded with a rebuttal to the state Senate’s investigation: Criticizing the Legislature’s past performance in oversight, while defending the report for verifying some of its claims.

“The Legislature has historically done a terrible job of overseeing an agency that has gotten so much wrong, ending up hurting the very people that it is supposed to protect,” said Consumer Watchdog’s Liza Tucker, the author of the original Golden Wasteland report. “The report by this Senate office underlines that lack of oversight.”

She added, “Its report verified a dozen allegations in Golden Wasteland, which made the case the agency is dominated by the companies it regulates.”

Coming to Consumer Watchdog’s defense is a group of housing advocates organized by a project of the Center on Race, Poverty & the Environment.[4]

“For residents of Autumnwood, who reached out to DTSC for relief and received none, this report is a disappointment,” Xonia Villanueva, a member of the People’s Senate, said in a recent press release. “It’s as if the Senate investigator was tasked with discrediting communities in California that are crying out for help.”

Senate report adds to past criticism

Steve Maviglio, a Democratic strategist and frequent critic of Consumer Watchdog, pointed to the state Senate’s findings as validation of his extensive research[5] into the nonprofit.

“The critique isn’t coming from an ideological foe of Consumer Watchdog,” said Maviglio, who has published his research at the cleverly named, ConsumerWatchdogWatch.com[6]. “It’s coming from the research arm of perhaps the most progressive state Senate in the nation.”

In Maviglio’s view, Consumer Watchdog’s research has been biased by funding sources, most of which it refuses to disclose.

One funding source that has been well-documented is revenue that the group receives from policing the government regulations it helps write. Founded by consumer advocate Harvey Rosenfield, the author of Proposition 103[7], which increased state insurance regulation, Consumer Watchdog has benefited from provisions in state law that allow it to act as an “intervenor.”

“‘Intervenors’ can get paid hundreds of dollars an hour (paid by insurance companies) in fees to monitor the rate process, supposedly on behalf of the public,” wrote UT San Diego columnist Steven Greenhut[8]. “No surprise, Consumer Watchdog is the most proficient intervenor and has received millions of dollars in its challenges under Proposition 103.”

That leaves some critics deeply suspicious of any claims made by the organization.

“Consumer Watchdog’s name should be Trial Lawyers’ Helper,” CalWatchdog.com contributor Chris Reed wrote in a blog, late last year[9]. “The organization aggressively works on many fronts to increase the ease with which trial lawyers can take money from people.”

Don’t expect Consumer Watchdog to be slowed down by the recent criticism. Last month, it published a new report, “Inside Job[10],” which, in the group’s words, looks into how “Boeing and its influential fixers derailed the cleanup of a partial nuclear meltdown site in greater Los Angeles.”

(You can read the report by the state Senate Office of Oversight and Outcomes here: “Fact Check: Despite Failures by State’s Toxics Regulator, Many Recent Criticisms are Unfounded”[11].)