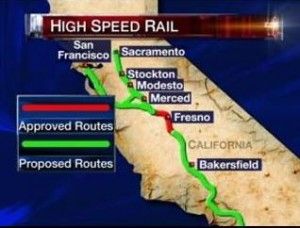 Kenny had ruled that the current funding plan, as approved by the California Legislature, did not follow the strictures of Proposition 1A[2], the 2008 initiative approving the bonds for the project.

The appellate court instead agreed with California Attorney General Kamala Harris. Her office argued that the Legislature had the power to interpret the proper funding mechanisms for Prop. 1A, and the courts should let that process work itself out.

In the court’s language, “[A]bsence of a clear directive from the people to constrain the discretion of the Legislature, we will not circumscribe legislative action or intrude on the Legislature’s inherent right to appropriate the funding for high-speed rail. “

Yet the project also was given a warning.

Basically, the Appellate Court said that the California High-Speed Rail Authority, which runs the project, has until they file for the second funding plan to get their act together.  There is no time requirement for when the second funding plan is due. But when they file, they must have finished all the environmental work and demonstrate they have the funding for the entire initial operating segment.

“[U]nder the Bond Act, bond funds cannot be committed and spent until the second and final funding plan is approved by the Authority and submitted to the Director of the Department of Finance and the Chairperson of the Joint Legislative Budget Committee, and an independent financial consultant prepares a report. …

“This latter report is particularly significant in that the independent consultant must certify that construction can be completed as proposed and is suitable for high-speed rail; the planned passenger train service will not require an operating subsidy; and upon completion, passenger service providers can begin using the tracks or stations. …

“The Authority has repeated frequently that it will have all the requisite environmental clearances before construction begins. CEQA [California Environmental Quality Act] certainly demands nothing less. The Tos real parties [Kings County and two local residents who brought the original lawsuit], in fact, concede that state and federal law require environmental clearance before starting construction. Because the Authority must comply with CEQA before the project proceeds, a writ of mandate is not necessary.”

It is the requirements of the second funding plan that give hope to the legal team that brought the case for Kings County and the the two local residents. Co-counsel Mike Brady said, “The Authority must show that the project will be successful financially.”

He added via an email message, “They have to make a stronger showing that they have enough money in the bank or firmly committed to be able to complete the useable segment that they picked, a segment costing in today’s dollars about $35 billion.”

Brady also believes that, when the CHSRA wants to spend the Prop. 1A bond funds, “They will have to demonstrate they have obtained all the environmental clearances for the entire 300-mile usable segment that THEY picked.”

He said the appellate court indicated the litigants would have the opportunity to challenge the legality of the CHSRA’s spending when it actually tries to access the money in the bond fund.  “They have to apply for that money through a different section of the law, a section which is actually much tougher on the Authority with respect to what it has to prove,” he said.

However, Co-Counsel Stuart Flashman said, “The court has essentially allowed the Authority to ignore promises it, and the Legislature, made to California’s voters.  It bodes ill for voters’ willingness to trust such promises in the future.”

The legal team is considering an appeal. The basis would be larger than the high-speed rail project.   Brady said, “We are also evaluating the possibility of going to the state Supreme Court on issues such as respect for the protection of the voters in the initiative process when measures were specifically enacted for their protection and are then brushed aside, contrary to the intent of the initiative.”