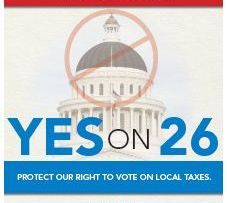 One of the few recent big triumphs of the small-government, low-tax movement in California came in 2010, when state voters approved Proposition 26[1].  The constitutional amendment cleared up loopholes that allowed governing bodies to pass tax hikes on simple majority votes if they asserted the taxes were actually fees. Here is part of the ballot argument for it:

Proposition 26 requires politicians to meet the same vote requirements to pass these Hidden Taxes as they must to raise other taxes, protecting California taxpayers and consumers by requiring these Hidden Taxes to be passed by a two-thirds vote of the Legislature and, at the local level, by public vote.

But this hasn’t stopped California politicians from attempting to get around its restrictions. In San Diego, authorities seeking to fund a costly expansion of the convention center so it could continue to attract Comic Con came up with a novel approach raising hotel room taxes in tiers based on how close they were to the convention center. It won approval from a trial court judge.

Then it ran into an appellate court that understood that Prop 26 was intended to thwart maneuvers just such as this. Here is the KPBS account[2]:

The Fourth District Court of Appeals overturned a 2013 ruling by Superior Court Judge Ronald Prager that approved a hotel room tax to be used to finance the $520-million expansion. That tax was voted on by hoteliers, not by voters.

San Diego city officials tried to get around that requirement by forming a district of hotel owners who voted instead, saying the vote was only required by the people who own the land on which the hotels sit.

They did so despite an explicit warning from San Diego City Attorney Jan Goldsmith that the strategy was legally risky.

Today, city leaders will try to figure out [3]what to do next. They missed the deadline to put the matter before voters in November, which is what Goldsmith recommended in the first place. Voters aren’t nearly as hostile to taxes on visitors as they are to taxes they pay directly, so that’s still the logical approach.

Goldsmith is now warning city leaders that an appeal to the state Supreme Court is a long shot.

I think he’ll be heeded this time around.