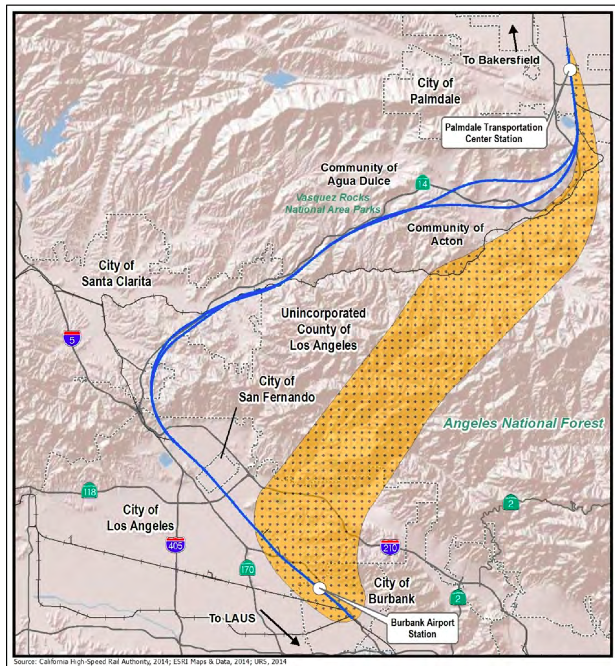 The cost of the high-speed rail project might be going above the current estimate of $68 billion[1].

The California High-Speed Rail Authority recently announced a strategic shif[2]t to consider an alternative for its 40-mile Palmdale-to-Burbank link. Instead of the current plan of running it parallel to the Palmdale Freeway, the new line would run through a tunnel[3] under the San Gabriel Mountains.

According to Los Angeles County Supervisor Mike Antonovich[4], who has advanced the idea, the tunnel would be about 15 miles long.

The CHSRA told CalWatchDog.com that it did not yet have estimates on the tunnels’ cost.

Curbed L.A. reported[5], “The tunnel would go under the San Gabriel Mountains and shorten the travel time along the stretch, though it’s not yet known by how much. Also not known yet: how much more it’s going to cost. The new route, plus one that runs from Burbank to Union Station will be discussed at an upcoming series of public scoping meetings over the first few weeks in August.”

But it’s possible to calculate a rough — very rough — estimate. Let’s start with something we know: the tunneling cost for the proposed extension of the Long Beach 710-Freeway: $6 billion[6] for a 4.9-mile segment[7], which works out to $1.22 billion per mile.

Next, let’s return to the proposed high-speed rail land surface route, on which we have an official estimate. The proposal to run the 40-mile Palmdale-Burbank link on the land surface parallel to the Palmdale Freeway would cost $13.5 billion, or $337.5 million per mile, according to a June 30 report in the Los Angeles Times.[8]

Now, let’s compare the two routes. The estimated $18.3 billion cost for the tunnel would be $4.8 billion, or 36 percent, more than the estimated cost of $13.5 billion for the land surface route.

That $4.8 billion extra cost also would increase the $68 billion cost of the entire system to $72.8 billion, a 7 percent increase.

Again, these are just rule-of-thumb estimates. We’ll have to wait until the CHSRA comes through with its won estimates of the cost of the potential tunnel to examine them more closely.

According to the San Gabriel Valley Tribune[9], the following public meetings will allow citizens to ask about and discuss the proposed tunnel and other aspects of the project.