Did Caltrans cover up shoddy work on Bay Bridge? 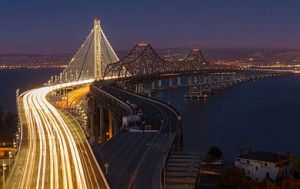 Douglas Coe, an engineer under the employ of the California Department of Transportation[1], spent years working on the retrofit of the eastern span of the Bay Bridge between Oakland and San Francisco.

When the 25-year Caltrans veteran told his supervisors there were cracks in thousands of welds made at a Shanghai factory, and the quality-control firm that was supposed to have conducted inspections of the factory had not properly done so, he was taken off the Bay Bridge project.

In an appearance last week before the state Senate Transportation and Housing Committee[2], the Caltrans official who dismissed Coe told lawmakers that he decided the engineer could “no longer operate as a member of the team.”

But there was no attempt to squelch Coe’s warnings about the defective welds and related issues concerning the Bay Bridge project, insisted Tony Anziano. Anziano was the project manager for the eastern span retrofit who kicked Coe off the team, reassigning the engineer to a bridge project in the Contra Costa County city of Antioch.

Yet, not until recently, Kelly confirmed, has he gotten around to ordering an investigation to ascertain whether Anziano and other Caltrans officials retaliated against Coe and other engineers who blew the whistle on shoddy work on the $6.4 billion bridge retrofit.

Aside from being well overdue, the investigation initiated by Kelly is problematic because the CalSTA secretary delegated it to the California Highway Patrol[4], which is a branch of CalSTA, along with Caltrans.

Kelly apparently does not see a conflict of interest in having CHP investigate Anziano and other Caltrans officials that oversaw the Bay Bridge. But the conflict is obvious from Kelly’s decision at the investigation’s outset that it would be administrative, rather than criminal.

If an investigatory body independent of Caltrans were tasked with looking into charges of retaliation against Coe and other whistleblowers on the Bay Bridge project, it almost certainly wouldn’t rule out criminal charges before it had even interviewed the first witness.

Especially when there are allegations that Caltrans officials overseeing the retrofit of the Bay Bridge’s eastern span violated California’s Public Records Act[5] by covering up evidence of shoddy work.

Indeed, Coe told an investigator retained by the transportation and housing committee that Anziano told him “not to record his concerns in writing, either on paper or email, but rather to communicate orally” so the concerns would not be found out under a public records request.

The investigator concluded that as many as nine engineers, including Coe, were either fired, demoted or reassigned (as Coe was) to quiet their criticism of the Bay Bridge Project.

Nevertheless, Senate Transportation and Housing Committee Chairman Mark DeSaulnier[7], D-Concord, said he will turn over the committee’s findings to state and federal prosecutors and let them determine if there has been an criminal wrongdoing by Caltrans managers or officials.