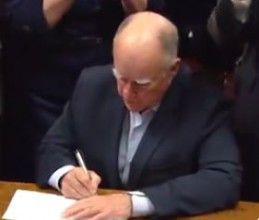 With the drought still drying up the state, the California Legislature and Gov. Jerry Brown Wednesday poured out a $7.5 billion water bond that includes $2.7 billion for water storage. If voters give their approval this November, this will be the first bond in 50 years to include water storage.

The storage is significant because, from 1971 to 2014, California voters passed 21 water bonds totaling $35.9 billion[1] without any water storage. Paraphrasing poet Samuel T. Coleridge[2], California had “bonds, bonds, water bonds, but not a drop of water to drink.”

Said Republican Leader Bob Huff[4] of Brea, “It was real critical to get a bond that actually helped fund two reservoirs.  We’ve had a lot of bonds in the last 15 years that haven’t had any storage, so we finally have a water bond that has water in it.”

The new water bond is Assembly Bill 1471.[5] Here’s a first look at its contents:

Restore the Delta opposed water for the Delta

Opposition includes Restore the Delta[10], which objected to the bond because it was not “tunnel neutral.”[11] The group opposes Brown’s plan to build two tunnels under the Delta to keep separate ocean water from inland (unsalty) water.

Restore the Delta also didn’t like that the bond would provide $200 million[12] for the Wildlife Conservation Board to buy water from willing sellers for the benefit of migratory birds and wildlife refuges.  But Restore the Delta believes the same water to be bought for wildlife eventually could be pumped through the proposed Twin Tunnels.

Said Restore the Delta Executive Director Barbara Barrigan-Parrilla[13], “It contains false protections for the Delta, and we call upon legislators, especially those representing the Delta, to vote against it. We are not fooled, and this bond will become a referendum for the tunnels. That is not going to advance the water solutions we need.”

All that remains to be seen is if the voters can gulp down a $7.5 billion water bond with water storage in it for the first time in almost 50 years.