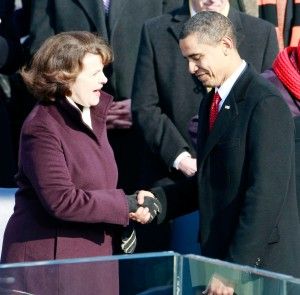 California Sen. Dianne Feinstein won’t put up with the CIA spying[1] on lawmakers. Her repeated denunciations of the agency this year have been remarkable, considering her decades as a leading figure in the national security establishment.

But Feinstein isn’t so forthright when it comes to the politics of immigration — specifically, the amazingly cynical way the Obama White House has used the issue as a club to beat up Republicans.

Consider the big crisis at the border in recent months in which children fleeing Central America arrived in Texas in the tens of thousands in the belief that they would get “permiso” to stay in the U.S. The president on June 28 told The New York Times of his intention to deal with the problem in a story headlined “Obama to Seek Funds to Stem Border Crossings and Speed Deportations.” On July 8, he wrote a letter to Congress asking for $3.73 billion in emergency funding to deal with the crisis and implement his plan.

No White House ‘fingerprints’ on legislation

But as Politico reported Monday[2], the president’s private actions didn’t match his public comments. His administration didn’t even want to be associated with a specific plan.

The White House fax arrived at the Senate on July 22 with no letterhead attached and an almost Onion-like heading: “Deliberative Pre-decisional Technical Assistance.”

Days before, on July 17, Homeland Security Secretary Jeh Johnson had met with Sen. Dianne Feinstein (D-Calif.) to discuss changes in law sought by President Barack Obama to speed the deportation of unaccompanied child migrants who had been crossing the Rio Grande from Central America in record numbers.

The three and a half pages of draft legislation — faxed to Feinstein’s office — represented the work of attorneys at the White House and Homeland Security trying to answer her demands that the administration be more specific.

A month later, that single fax still stands out as the closest Obama ever got to spelling out his legislative proposal.

Even then, as the obscure title suggests, there were no public commitments, no presidential fingerprints. And the White House still refuses requests from POLITICO to see the draft, the outlines of which were described by several people familiar with the document. …

Obama, trained at Harvard Law and surrounded by attorneys, never spelled out the changes in law he wanted — changes that would directly affect child migrants, who most often have no attorneys of their own.

She ‘was said to be too focused on other matters’

And who is enabling it? Feinstein.

Repeated requests by POLITICO to speak to the senator were rejected. Written questions were submitted in advance and went unanswered. The California Democrat, as chairwoman of the Senate Intelligence Committee, was said to be too focused on other matters. Instead her press office referred a reporter to the senator’s floor speech July 30 — a speech that said nothing about the fax.

Both parties can be said to have hypocritical streaks on immigration. Republicans are perceived to be the biggest roadblocks to comprehensive immigration reform, but their strongest faction — business interests — welcome changes that will bring more cheap workers to America. Some GOPers’ rhetoric on the issue simply doesn’t match how they use their power.

But there’s something breathtaking about Democrats’ cynicism. In 2009-10, Dems controlled Congress and the White House. They could have passed immigration reform if they wanted. But they didn’t, instead putting their energy behind passing the massive stimulus bill in 2009 and Obamacare in 2010. And after the House went Republican in November 2010, a reason for this inaction became obvious.

It allowed Dems to bash GOPers on immigration on an ongoing basis going forward.

Now, with the border kids, the pattern repeats itself — with the assistance of Dianne Feinstein, who has spent her entire career cultivating the image of a smart public servant who skips much of the usual posturing and preening seen in Washington.

On this issue, she’s not a California Dem. She’s just another Chicago Dem, playing cynical hardball with the lives of thousands of kids.