House Republicans face fire from many quarters for the dozens of times they have voted to repeal the Affordable Care Act, and the critics sometimes aren’t just the usual partisan soldiers. Plenty of editorial boards are incensed by this tactic. They say it is a symbol of Washington’s allegedly horrible gridlock. They harrumph that GOPers know this will go nowhere in the Senate, and a presidential veto is always an impregnable final hurdle, so why bother? 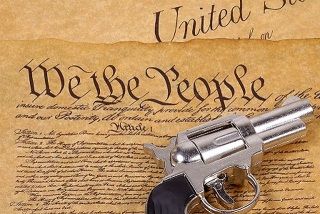 Yet in California, Democrats have a similar ritual — and it draws not fire but praise from many of the state’s editorial pages. It’s the Legislature’s habit of passing tough gun control rules that are obviously going to be tossed by federal courts for cramping the Second Amendment’s right to bear arms.

Why do I say “obviously going to be tossed”? Because while it seems to have failed to sink in with most of the media, America is in a new era when it comes to gun rights. After decades of  justices’ wobbling, bobbing and weaving, the U.S. Supreme Court now has a majority that has firmly and consistently held that the Second Amendment isn’t part of a “living document.” It means what it says.

The turning point came at term’s end in June 2008:

WASHINGTON — The Supreme Court on Thursday embraced the long-disputed view that the Second Amendment protects an individual right to own a gun for personal use, ruling 5 to 4 that there is a constitutional right to keep a loaded handgun at home for self-defense.

The landmark ruling overturned the District of Columbia’s ban on handguns, the strictest gun-control law in the country, and appeared certain to usher in a fresh round of litigation over gun rights throughout the country. The court rejected the view that the Second Amendment’s “right of the people to keep and bear arms” applied to gun ownership only in connection with service in the “well regulated militia” to which the amendment refers.

Justice Antonin Scalia’s majority opinion, his most important in his 22 years on the court, said the justices were “aware of the problem of handgun violence in this country” and “take seriously” the arguments in favor of prohibiting handgun ownership. “But the enshrinement of constitutional rights necessarily takes certain policy choices off the table,” he said, adding: “It is not the role of this court to pronounce the Second Amendment extinct.”

That’s from The New York Times. This most important ruling of Scalia’s career has swung like a wrecking ball ever since, helping along by a 2010 Supreme Court ruling[1] declaring that the Second Amendment applies to local and state laws, not just federal law.

This piece from last week in the Los Angeles Times[2] showing a surge in concealed-carry permits reflects the new strength in Second Amendment enforcement. A state law permitting counties to set their own restrictions on such permits was struck down in February[3] by … drumroll, please … no less a liberal pillar than the 9th U.S. Circuit Court of Appeals.

Then there is this development last week:

In another setback for California’s tough gun-control laws, a federal judge ruled Monday that the state can’t require gun buyers to wait 10 days to pick up their newly purchased weapon if they already own a gun or have a license to possess a handgun.

U.S. District Judge Anthony Ishii of Fresno said the 10-day wait for current gun owners is a restriction on constitutional rights that isn’t justified by safety concerns. He noted that all firearms purchasers, including second- and third-time buyers, must pass a state background check of their criminal and mental-health records, but said it was unreasonable to make gun owners wait the full 10 days to acquire another weapon.

That’s from the San Francisco Chronicle[4].

Observation about Dems holds for media

But as Bee columnist Dan Walters recently pointed out[5], there are still more weak laws this year coming out of a Legislature whose Democrats see guns as no less than a “secular sin.”

Dan could have noted that largely holds true for the California media as well. In 2004, New York Times ombudsman Daniel Okrent wrote a powerful essay[6] about gun owners being among  “the groups The Times treats as strange objects to be examined on a laboratory slide.” The CA media offer the same incredulity about anyone who believes in the Scalia interpretation of the Second Amendment — in my personal experience, incredulity tipped with disdain.

Good people, you know, abhor guns! They just do! Or they’re not good.