In debate, Brown mocks Mississippi and Arkansas (i.e., the Clintons) 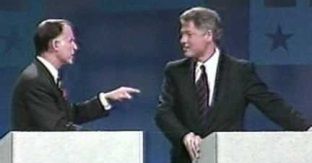 In Thursday night’s debate between Gov. Jerry Brown and Neel Kashkari, the candidates sounded pretty scripted until Brown was asked about California’s ability to deal with its huge pension shortfalls.

Brown depicted that as an absurd question for a wealthy state with a proud history and vast resources. “Are we in Arkansas or Mississippi? This is the eighth-largest economy in the world,” he declared.

Yes, of course, the great majority of people would rather live in California than Arkansas or Mississippi. Summers that are like a humid version of Las Vegas kill the soul.

But if Brown is going to mock these states, that invites comparisons.

So here we go. The governor of California holds up Arkansas and Mississipi to ridicule even though …

— They have a much lower poverty rate[1], according to Census Bureau statistics that also include the cost of living.

— They have much lower unemployment, using the Bureau of Labor Statistics’ more refined U-6 measure[2] that is based on adults who want full-time work but can’t find it, instead of treating part-time workers who rarely have benefits like full-time workers.

— They have far higher rates of home-ownership[3], too.

As in 1992, Brown takes debate potshot at Clintons

But I get a great kick out of this because I think Jerry Brown knows exactly what he’s doing.

Jerry has had bad blood with the most famous Arkansan of our time since early 1992. That is when, during a Democratic presidential candidate debate, he alleged that Gov. Bill Clinton had funneled state money to the Little Rock law firm of his wife, Hillary Clinton. Bill Clinton was, er, peeved. Here’s a link[4] to a great short clip in which Bill tells Jerry off.

In Thursday night’s debate, Brown could have made his haughty point a number of ways.

But he said “Arkansas or Mississippi.”

If you’re a political junkie, this is delicious.