The Sacramento press corps has been acting bored with the governor’s race ever since the spectacle of Tim Donnelly as the GOP nominee faded away. So now we have a debate in which Jerry Brown makes a debate gaffe as dumb as President Gerald Ford’s 1976 claim[1] that Eastern Europe wasn’t dominated by the Soviet Union, and everyone ignores it. I wrote about this here[2]:

The instant media consensus after Thursday night’s first and only debate between Gov. Jerry Brown and Republican challenger Neel Kashkari was that the underdog GOP novice did better than expected but that no one got in a knockout punch.

But what about self-inflicted wounds? The governor shouldn’t get a pass for his bizarre claim that his 2012 reform measure ended pension spiking by public employees. It was just last month that the board of the California Public Employees’ Retirement System approved 99 ways for government workers to spike pensions above their base pay.

Who just made this point about CalPERS just two weeks ago? Dan Walters, the co-dean of the Sacramento press corp:

Among other things, the reform legislation sought to reduce “spiking” of pensions by restricting their calculation to regular pay.

This week, the California Public Employees’ Retirement System, whose board is dominated by union representatives and union-friendly politicians, revealed a very generous interpretation of that provision.

It declared 99 forms of pay over and above regular salaries to be “pensionable.” 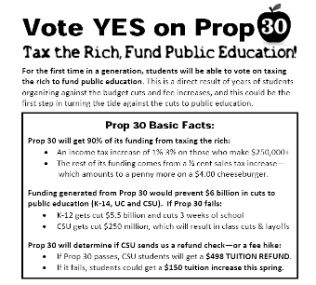 Media coverage of Thursday night’s debate also included this hysterical “fact check”[4] from the Sacramento Bee on “Is Brown too close to teachers union?”

The Bee’s conclusion seems to be “no.”

It is true that the CTA gained broader influence in state politics after Brown, when he was governor before, signed the Rodda Act in 1975, requiring school districts to engage in collective bargaining. The CTA spent millions of dollars helping Brown win election in 2010 and remains a major supporter.

Yet despite their generally favorable relationship, Brown has irritated the union in the past with his advocacy for charter schools. He started two charter schools while mayor of Oakland and lobbied against legislation to unionize charter school teachers.

That is all the context offered. What truly awful journalism.

We are coming off a two-year period in which first the governor, at the behest of the CFT and CTA, got income and sales taxes raised with Prop 30, with the proceeds mostly going to school districts’ operating budgets — in other words, to make it much easier for union-controlled school boards to raise teacher compensation after years of tight budgets.

Then Brown changed school funding formulas in a way that delivered far more money to L.A. Unified, which is dominated by the single most powerful local union chapter in the state — United Teachers Los Angeles. The extra funds are supposed to go to help struggling students. But as the L.A. Daily News reported last month, the UTLA has explicitly said[5] they should be used to give teachers a huge raise.

Concluding a second round of contract talks Wednesday, teachers union leaders released a statement … . United Teachers Los Angeles said district administrators explained that educators could receive either smaller class sizes or be “compensated fairly,” but not both.

“We don’t buy it,” the statement says.  “Millions of extra dollars have already flowed into the district as part of the state’s new funding formula.”

The teacher’s union wants a 17.6 percent pay raise, while district officials say they can only afford a 6.64 percent across-the-board raise and 2 percent bonus.

Oh, yeah, Jerry and the teachers unions aren’t tight because a decade ago Jerry wanted charters in Oakland!