Debra Bowen revelations appear to explain her failure on job

Saturday’s Los Angeles Times’ bombshell about Secretary of State Debra Bowen’s struggles with depression[1] struck a sad chord with many people who have struggled with mental illness or had a family member with such problems.

Two months before Californians go to the polls to choose a governor, the state’s top elections official tearfully acknowledged Friday that she has been consumed by a “debilitating” depression that has often kept her away from the office.

Secretary of State Debra Bowen, who oversees statewide voting, told The Times that she has a history of depression and has moved out of the two-story country home she owns with her husband. She now resides in a trailer park on the outskirts of Sacramento. …

The secretary said she is receiving professional help, is comforted by support from friends and has not been hospitalized. She described her new living accommodations as a refuge, characterizing the mobile home park as one containing “extended-stay cottages.” …

Her trailer at Arden Acres has cracked windowsills, and some windows have cardboard behind the glass to block the sun. Behind it is a storage yard with a giant, rusting shipping container pressed against the other side of the fence. On Thursday, her state-issued Buick was parked outside, the back seats and front passenger seat full of cardboard boxes brimming with clothing and household goods.

This may fully or partly explain her utter diffidence as secretary of state over the past seven and a half years. As the LAT story noted …

She has been criticized periodically for being distracted on the job, most recently during her 2010 reelection campaign. Republican challenger Damon Dunn noted then that the time it took her office to process business filings had more than tripled. (Bowen said a backlog was due to budget cuts.)

In addition, a project that now allows online voter registration was four years behind schedule. Bowen had said it takes time to find the right contractor.

Open-government advocates bashed her for failing to upgrade California’s online campaign finance reporting system, which is antiquated and unwieldy.

Her years of disinterest in trying to minimize business paperwork delays produced a harsh rebuke from the Sac Bee edit page in March 2013:

If Texas can process an application to form a limited liability company in five days, even less if the registration application is filed online, why does it take California six weeks? In California, home to Silicon Valley, the most sophisticated collection of high-tech companies in the world, why can’t the state process business filings online?

California Secretary of State Debra Bowen blames state budget cuts for the many embarrassing shortcomings and backlogs in her office. Lack of money should not have been a problem. After all, the business portal side of Bowen’s office – the place where entrepreneurs seeking to form corporations or limited liability companies or partnerships file their paperwork – is entirely fee-based. It’s supposed to be self-supporting. The businesses pay for the cost of the operation.

In fact, California charges among the highest fees of any state in the nation for what appears to be perhaps the worst service, as a limited survey by The Bee’s Jon Ortiz suggests.

I sure didn’t see this coming. In 2006, I voted for Bowen over appointed Republican Secretary of State Bruce McPherson after being put off by McPherson’s hauteur and arrogance in an interview.

It wasn’t just McPherson’s manner. I also was impressed by Bowen’s persistence, patience and maturity during the state’s bizarre 2000-01 energy crisis[2], the fiasco that so damaged then-Gov. Gray Davis that it paved the way[3] for his 2003 recall. Bowen, a Redondo Beach Democrat, was chair of the state Senate’s Energy, Utilities and Communications Committee. In early 2000, after hearings by her committee, she warned that California’s faux energy dergulation bill of 1996 was going haywire.

But Davis was more interested in posturing and blaming utilities and power suppliers than acting decisively to address both soaring energy costs and supply limits that produced regional blackouts. He was such a dithering dolt that in December 2000, 75-year-old former Secretary of State Warren Christopher — an Edison board member — harangued him at a private meeting about needing to figure out the basics of public leadership.

Bowen played an important role in the cleanup, especially when she resisted attempts to rush through a flawed fix. As she noted, it was the rush to pass the faux deregulation bill in 1996 that created the mess.

I wasn’t just observing from afar. I was then a government and politics reporter for The Orange County Register, which sent me to Sacramento in late January and early Februrary 2001 to bolster our coverage as the crisis crested. In a Capitol dominated by a dilettante (Davis) and a wack job (Senate President John Burton), Bowen stood out.

Based on her performance in the Legislature, I never expected her to disappear after she got a promotion. But that’s pretty much what happened.

Missing-person report: SOS for the SoS 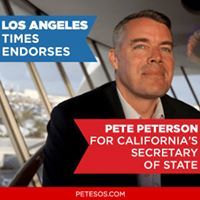 In May, when I met Pete Peterson, the brainy, impressive GOP reformer who hopes to succeed Bowen in November’s election, I told him how surprised I was that Bowen was such a fiasco in statewide office. I said someone should file a missing person report for the secretary of state.

Peterson laughed, and so did I. But I wouldn’t tell such a joke now. I hope Bowen gets the help she needs — and that California finally gets the great secretary of state that it needs and deserves.

Peterson could be that good. He’s already won a long list of endorsements from newspapers left and right. Don’t hold the LAT’s applause against him.