Business Insider ran a map provided by Deutsche Bank[1] about the rise and fall of some of the world’s largest economies, showing China’s return to global preeminence. This is crucial because we’re on the Pacific Rim and enjoy vast trade. Check your iPhone and it reads, “Designed By Apple in California. Assembled in China.” 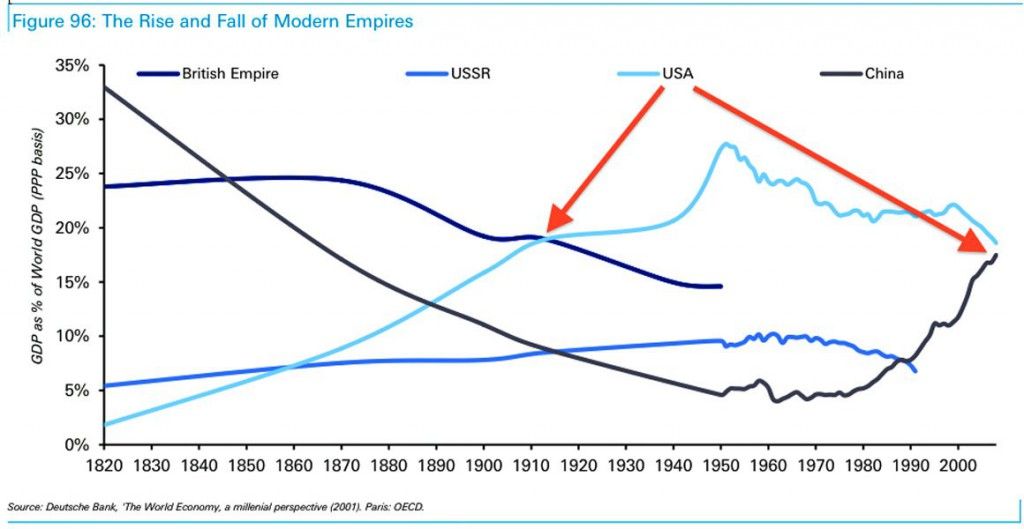 It’s too bad the chart cut off the British Empire after it collapsed after WWII. As journalist Malcolm Muggeridge quipped, “[It was] a time when we have lost an Empire on which the sun never set, and acquired a Commonwealth on which it never rises.” The UK economy was slammed by two world wars. But after WWII, they went full-tilt socialist and became the “sick man of Europe” until the 1979 revival under Margaret Thatcher. Since, under the Cool Britannia socialism of Tony Blair and Gordon Brown, 1997-2010, the country sank so low it hasn’t recovered, and Scotland now might bolt[2].

Russia is included through the USSR, but not after the end of communism in 1991. And Germany is not included at all, nor is Japan.

But we do see the fast rise of the United States under its free-market system until about 1913, then a leveling off, then a sharp ascendance to total global preeminence after World War II, when all the other major economies were bombed out and bankrupt. Then it declined to about 20 percent of the global economy and stayed there until around 2001, when the horrible Bush policies started digging in: massive new spending, deficits and debt; badly designed tax “cuts”; and intrusive new anti-business regulations, such as Sarbanes-Oxley. The anti-production policies have continued under Obama.

For China, the chart shows its role in 1820, due to its huge population and ancient civilization, as by far the world’s biggest economy. But then China had difficulty with the Europeans rising with their might from the Industrial Revolution, and Chinese society to a great extent collapsed. It hit rock bottom under Mao’s communism, 1949-1976. Then Deng’s capitalist reforms rocketed China back upward, soon to be No. 1 again.

But who knows how long that will last. America currently is weighted down by more than $200 trillion[3] (with a “t”) in unfunded liabilities for the federal government. It’s more than $700,000 owed by every American family. That can’t possibly be paid. Mainly hurt will be senior-citizen Baby Boomers when the Social Security and Medicare benefits sharply are cut.

Defaulting on the debt, which is inevitable, will clear the books, allowing for Deng-style reforms that end socialism and bring back free markets.