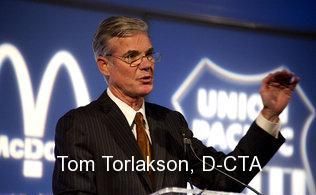 State Superintendent of Public Instruction Tom Torlakson debated challenger Marshall Tuck on Wednesday night and once again found himself on the defensive over the teacher tenure laws targeted in the Vergara decision. Cabinet Report details[1] how Tuck went after …

… Torlakson’s support of teacher tenure laws that were invalidated by a superior court judge earlier this summer, and a more recent decision by the superintendent to seek an appeal of the ruling.

“I helped pass a law this year to make it easier to fire ineffective or abusive teachers, but I also believe that experienced teachers deserve a fair hearing when their job is on the line,” said Torlakson in his opening statement.

That’s just not true; the teacher-discipline bill approved by the Legislature this year makes it easier to fire perverts and those who engage in other types of “egregious misconduct.”[2] It doesn’t make it any easier to fire teachers who are simply bad at teaching.

This is part of a larger picture of an education status quo devoted to the interests of teachers, not students, as Tuck has said all year. More from Cabinet Report on Wednesday night’s debate:

Tuck, a champion of charter schools who helped establish a network of takeover schools for the mayor of Los Angeles, has used the Vergara decision as a cudgel throughout the campaign. …

Torlakson defended his position, saying the decision is fundamentally flawed. “I believe in job protections and giving teachers a chance to a hearing,” he said.

Reasonable job protections — or ridiculous ones?

But the problem for Torlakson, a former high school math teacher, is that his reasonable-sounding rhetoric is used to describe a process that isn’t reasonable. Lance Izumi of the Pacific Research Institute has documented how in the the 1990s, a grand total of one teacher was fired for incompetence in the Los Angeles Unified School District, the nation’s second largest district.

Pre-Vergara, out of 275,000 teachers statewide, 2.2 teachers were dismissed for unsatisfactory performance per year on average. Do you believe that only 0.0008 percent of professionals in any given field are unsatisfactory? Then why would that be the case in the teaching profession?

That’s from an op-ed[3] in U-T San Diego by Randy Ward, San Diego County superintendent of schools. Here’s more from his piece:

[It] is extremely expensive and time-consuming to dismiss unsatisfactory teachers. The superintendents of Oakland and Los Angeles Unified School Districts testified to performance-based teacher dismissal costs ranging from $50,000 to $450,000. Costs like that represent a strong disincentive for principals and district administrators to use the process. Instead, they opt to shuffle the teachers around, with many of them ending up in the poorest communities and those with the neediest students.

What Vergara provides is an opportunity, an alternative to the views held by the shameless politicians in Sacramento who are appealing this verdict. We recognize and do not underestimate the powerful impact teachers have on our students’ lives, but we also know the adult-based statute system we have isn’t working. This is our chance to try something else. Ending “last in, first out,” where teachers are laid off by seniority rather than quality, basing tenure decisions on clear instruction-based rubrics, and lengthening the amount of time it takes to be granted teacher tenure would be decisive steps toward forging another path.

“Shameless” is a fair description of Torlakson. His depiction of his slavish support of the CTA and CFT as being tantamount to fighting for students is one of the most absurd spectacles in Golden State politics.