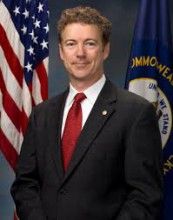 In the early search for an edge in 2016, Sen. Rand Paul, R-Ky., has trained his sights on California.

Doubling down on a strategy that saw Paul make waves with a well-received speech at the University of California, Berkeley in March, the presidential hopeful just took a big step toward using the Golden State as a touchstone of his reformist approach. In a one-two punch, Paul used last weekend’s California GOP Convention[1] to road test tones and themes of his presumptive campaign for president, then confirmed his plans for a new office[2] in the overwhelmingly Democratic city of San Francisco.

Paul’s address to the state party convention took advantage[3] of a political opening that is wider in California than many other states. The Republican agenda in Midwest or Mid-Atlantic states such as Wisconsin or New Jersey has been dominated by classic 20th century industrial issues like jobs and energy. Meanwhile, the personalities of popular but divisive governors such as Wisconsin’s Scott Walker and New Jersey’s Chris Christie have left little limelight to spare for other leadership figures on national tour.

The same is true of Texas, the other focal point of national Republican momentum. There, Gov. Rick Perry has consistently touted his state’s record on jobs and energy. Plus his own likely presidential ambitions have made the state inhospitable for competing contenders such as Paul.

What’s more, Perry’s own political strategy has availed itself of California in its own way — as a constant point of negative comparison. By pitting Texas against California, Perry has impressed many Republicans with the idea that the GOP can prove its mettle as a party capable of guiding large, diverse states toward broad-based prosperity.

For Paul, a quiet urgency has permeated his recurring, high-profile trips to California. In accordance with one of the simplest rules of presidential politics, Paul had to find and build a base of support — not just ideological, but cultural and financial. Despite his success in weaving his insurgent brand of libertarian conservatism into the fabric of the Kentucky political establishment, Paul had to set out across the country in search of a constituency large and powerful enough to leverage a presidential campaign.

That was where California came in. Unlike the libertarian-leaning Mountain West and Southwest, California includes large, wealthy and cosmopolitan areas where political influence is increasingly up for grabs. Although Paul used his convention appearance to publicly endorse gubernatorial candidate Neel Kashkari, Paul has clearly defined himself as a reform Republican with a pedigree and an agenda that differ from Kashkari’s.

At the same time, however, both Kashkari and Paul represent factions of the GOP that have quickly come to covet Silicon Valley support. Especially in recent years, the area’s tech titans have become increasingly disillusioned with Democratic leadership, whether at the state or national level. That has widely been seen as an opportunity[4] for Republicans.

Importantly, influential Silicon Valley denizens have begun to split markedly on their own interests in political reform. While some seek to support corporate-friendly, status-quo Republicans, others prefer more free-market libertarian conservatives. Kashkari has set out to cultivate support in the former group, while Paul has focused on the latter.

A key part of that strategy has required Paul to establish a physical presence within easy reach of Silicon Valley power brokers and potential donors. In an interview[5] with the San Francisco Chronicle conducted immediately after his keynote address, Paul described his acquisition of a San Francisco office as “in the process.”

He also took the opportunity to play up his friendship with web entrepeneur Peter Thiel, teasing a possible announcement concerning Thiel’s political support. “There’s a lot of smart people in Silicon Valley,” he said, “and we want to use their brains to figure out how to win.”

In another conversation with Breitbart News, Paul confirmed[6] that a formal announcement about his presidential candidacy would likely come as early as Spring 2015.