SoCal water reserves could dry up in 2016 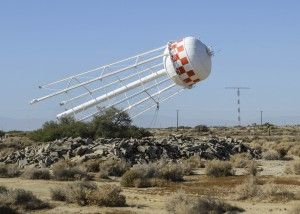 The nearby photo shows the recent demolition of a 160-foot water tank tower[1] at Edwards Air Force Base northeast of Lancaster. Could it be a prophetic image for Southern California’s future?

The Associated Press reported the area’s regional water supplier, the Metropolitan Water District of Southern California, could be without reserves by early 2016[2].

This stark news is based on the announcement that the MWD already has drained two-thirds of its backup water supplies.

In May 2013, the MWD announced its reserves of 2.6 million acre-feet of water were “the fullest they’ve ever been.”[4]  Going into the 2014 water year[5], MWD said it had adequate water reserves even after two consecutive prior dry years. But the long drought now has parched reserves.

Other MWD storage reservoirs are:

There also are about 437,889 acre-feet[10] of potential groundwater storage arrangements that the MWD holds in scattered water basins around Southern California.

The MWD also has arrangements with nine of its member water districts to store water in local groundwater basins.  This is called “conjunction use.”  As of July 21, 2013, about 67,400 acre-feet of water[11] was held in these groundwater banks.

However, how much of MWD’s groundwater storage supplies may be available given the massive loss of groundwater[12] due to evaporation during the 2014 drought remains to be seen.

North of Los Angeles, the state of California has three reservoirs where it stores water from the Sacramento Delta. The situation as of Sept. 23:

Excluding uncertain groundwater storage levels, as of Sept. 2014, MWD has about 494,048 total acre-feet of water in surface water reservoirs going into 2015, according to CalWatchdog.com[17]‘s calculations.

There are also about 384,264 acre-feet of water parked in federal and state reservoirs in Southern California.  Estimated total carry-over water going into 2015 is about 878,312 acre-feet, excluding groundwater storage.

All totaled, this would be enough water for about 5,269,872 people out of MWD’s 19 million-person customer base, or water for 28 percent of the population.

So if 2015 ends up another dry year, Southern California could be forced to have mandatory water rationing by 2016.