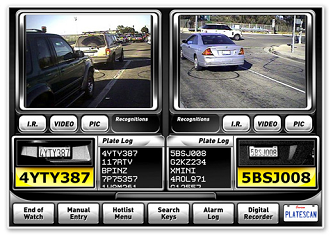 The inexpensive ease with which law-enforcement authorities can monitor the citizenry[1] has gotten some attention from the media, which has reported on how cell phones and cars are de facto tracking devices and on how NSA software allows it to readily track millions of calls made by Americans.

But this surveillance-state enabling is also true with relatively primitive, low-tech approaches as well. Using 1990s technology, license-plate scanners of the sort initially developed to catch cheats on toll roads are now in wide use on regular roads for no other reason but to provide law enforcement with a massive Stassi-style trove on who goes where.

And at the California trial-court level, at least, this is considered no big deal. This is from the L.A. Times[2]:

A San Diego Superior Court judge has tentatively turned down a request by the founder of the MP3 Internet music site for information about his license plates gathered through high-tech scanning.

Judge Katherine Bacal tentatively ruled this week that the records, retained by the San Diego Assn. of Governments on behalf of local law enforcement agencies, are exempt from the state’s Public Records Act. A final ruling is expected next week.

Michael Robertson had sued for access to his records on the grounds that keeping such information is an example of governmental over-reach and that disclosure is necessary to safeguard individual rights.

“If I’m not being investigated for a crime, there shouldn’t be a secret police file on me,” Robertson told the Associated Press.

The 1998 thriller “Enemies of the State” postulated a world in which rogue NSA agents organize assassinations and manipulate events to win passage of a new law allowing vast new government surveillance.

This plot line seems downright idealistic at this point — the bad guys were fighting to get a law passed? Really? Nowadays, we just see the federal government assume it has sweeping rights to spy on individuals, and the courts barely push back at all. And in California, we have mass license-plate scanning that only seems constitutionally acceptable if the government truly believes everyone is a de facto criminal suspect.