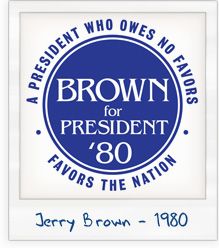 In his speech to the United Nations’ “climate change” shindig this week, Gov. Jerry Brown boasted of California’s record on Cap and Trade for carbon credits. He said[1]:

California has adopted a cap-and-trade system under the former governor, Governor Schwarzenegger. Passed what was called Assembly Bill 32 that set in motion a number of projects, including a cap-and-trade system which has been working now for two years. We’ve had several auctions, the price of carbon has remained steady at something over $13 a ton and the state has actually collected over $800 million. And that money is being directed into projects — renewable energy, efficiency, low-income housing near transportation hubs, high-speed rail and other projects to facilitate a greener future.

But you’ll notice if you read the whole speech[2], he didn’t use AB 32’s full name: the Global Warming Solutions Act of 2006. It was right after AB 32 was signed that activists began using the phrase “climate change,” which is meaningless, instead of “global warming.”

Today that solves the problem of there having been no global warming the past 18 years now[3].

But the money keeps flowing in from Cap and Trade, then flows out to the pork he listed. That’s what it’s all about — and Brown’s potential run for president in 2016.