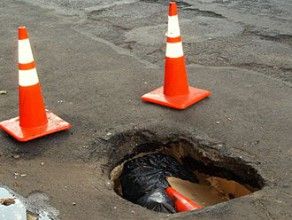 How can you tell there’s a pothole up ahead on the road? Look for the sign, “Welcome to California!”

A new study [1]by the National Association of Manufacturers found the country’s crumbling roads are hurting productivity by delaying supplies to factories. A previous study[2] found California’s roads are among the worst in the country.

We’ve all suffered rough riding on these horrible roads. In a trip I took last year around Silicon Valley, with the world’s greatest concentration of billionaires, I was shocked — and shook up — to be riding over potholed interstates. Well, at least the tech oligarchs can jet to the Fatherland to ride their Bentleys and Mercedes on the speedlimitless Authobahn.

“The United States is stuck in a decade-long decline [in infrastructure spending] that will eventually harm job creation, future productivity and our ability to compete head-to-head with companies all over the globe,” said NAM President Jay Timmons. President Obama in August signed legislation that propped up the federal highway fund until May with $10.8 billion derived from a relaxation of pension funding rules that exposes more of companies’ profits to federal income taxes.

NAM wants another $100 billion a year built on the infrastructure. Good luck on that. The money already is committed to federal and state debt, federal, state and local pensions and numerous other pork projects. Besides, fixing the roads for manufacturing also would allow more automobiles to flow freely, worsening “climate change.”

My suggestion: Stock up on shock absorbers.