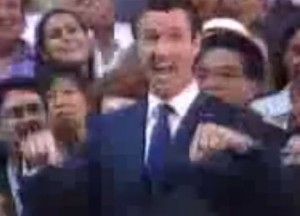 Lt. Gov. Gavin Newsom is crusing to re-election victory on Gov. Jerry Brown’s coattails and the general strength of the California Democratic Party. Yet he is reluctant to debate his Republican opponent, former GOP state Chairman Ron Nehring. The Bee reported:

Nehring, in only-somewhat tongue-in-cheek remarks Monday, said he’s even willing to accept a debate moderated by liberal MSNBC hosts Rachel Maddow or Ed Schultz. If the left-leaning cable channel can’t accommodate the request ahead of the Nov. 4 election, Nehring said in a statement, then he could be talked into appearing on Russian government-funded RT or North Korea’s KCNA, “although with that last one we can’t find a bureau for them in the United States.”

Newsom’s campaign is exceedingly unlikely to oblige. Spokesman Sean Clegg said flatly that he doesn’t anticipate the incumbent participating in any debates. In an email, Clegg cited Nehring’s recent salty email to state party leaders in which he bemoaned the disunity among GOP statewide candidates.

“Ron Nehring, who just attacked his own GOP members in a profanity-laced tirade, is out-of-control, reckless, desperate, and we have no intention of promoting him,” Clegg said.

But what about the future? It’s well known Newsom likely will run for governor when Brown’s fourth term ends in 2018; or for one of the U.S. Senate seats that could open up in 2016 or 2018. Possible opponents for any of these seats include California Attorney General Kamala Harris, former Los Angeles Mayor Antonio Villaraigosa and former Senate President Pro Tem Darrell Steinberg.

Wouldn’t debate practice now be preparation for the future?

Even the best debaters fumble on occasion, as Ronald Reagan did in his first debate [1]with Walter Mondale in 1984.

The Gipper more than fully recovered for the second debate[2]. When a reporter questioned Reagan about his age, 73 at the time, he quipped, “I want you to know that also I will not make age an issue of this campaign. I am not going to exploit, for political purposes, my opponent’s youth and inexperience.” He won every state but Mondale’s Minnesota home.

Before that year, Reagan took part in memorable debates with President Jimmy Carter in 2000 [3]and over the Panama Canal in 1978[4].

The point is you can’t get enough practice in debates. Given that he’s likely to win easily, Newsom should be eager for a dozen debates with Nehring.

By the way, instead of the usual campaign platform[5], why doesn’t Nehring just campaign on one plank? The plank: Get rid of this pointless post.

Anyway, without practice, in the future Newsom could be surprised the way Carter was by Reagan in the most memorable reply of the 1980 debate: