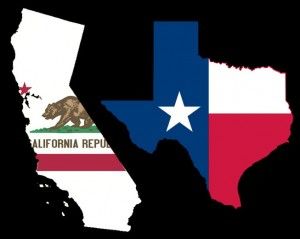 Heritage Foundation senior editor Mike Gonzalez[1] has a new book out this month, “A Race for the Future: How Conservatives Can Break the Liberal Monopoly on Hispanic Americans.” Gonzalez, a former Wall Street Journal reporter, takes a deeper look at how Hispanics have done in Texas vs. how they’ve done in California than past analyses, which usually focus on Texas’ superiority[2] in student test scores and little more.

Gonzalez wrote about his findings in the Dallas Morning News[3] earlier this month. He makes specific points about the cultural differences between Hispanics in the two mega-states that don’t get nearly enough attention. Here’s part of his essay:

Hispanics enjoy much better statistics across the board in the Lone Star State than in the Golden one.

The relative advantage that Hispanic Texans have in key cultural indicators is strongly related to the state’s dynamic economic growth and small government. But because Texas’ smaller government has allowed civil society to grow organically, there is a strong cultural background that must be considered.

In fact, when factoring in both economic and cultural factors, one can say that California and Texas stand for two completely different faces of the Hispanic experience in America or, more to the point, the Mexican-American experience. The question is whether the two states will continue to lead two different Mexican-American subcultures in the future, or whether one approach will come to be the dominant one nationwide. …

In 2013, Texas’ Hispanic population boasted an unemployment rate of 6.9 percent. That was more than 2 percentage points lower than the national Hispanic average (9.1 percent). More important, it was better than the overall national average of 7.4 percent and only six-tenths of a percent higher than Texas’ overall rate (6.3 percent).

One thing that may account for the lower Hispanic unemployment in Texas is that Hispanics in the Lone Star State are much more entrepreneurial than those in the Golden State. Texas’ rate of Hispanic-owned businesses as a percentage of the Hispanic population is 57 percent, whereas California’s is 45 percent.

Social stats somewhat better to much better in Texas

Texas’ Hispanics also score favorably on matters to do with the family. This is important, as two-parent households have proved to be the best anti-poverty program ever invented, and illegitimacy stands upstream from many social problems.

And in this key cultural indicator, Texas’ Hispanics also outperform California’s. According to the Census Bureau, the former are less likely to have had a child out of wedlock than the latter, 39.8 percent to 42.6 percent.

In terms of religiosity, the General Social Survey does not break down information at the state level but shows that Hispanics in Texas are far more likely to attend church services regularly. One is tempted to assume that California Hispanics are less religious than the national average for Hispanics.

This raises lots of interesting questions, none readily answered.

Are Texas Hispanics more religious and more entrepreneurial because they live in a state that’s far more socially and politically conservative?

Conversely, are California Latinos less religious and more likely to rely on the government because they live in a state that’s extremely secular and in a state where the high cost of housing puts families whose income would be lower-middle-class in most states squarely in poverty?

I’d like to see more analysis of these questions. But whatever the answer is, that’s not the key takeaway from Gonzalez’s research. The headline is that it’s not just student test scores in which Latinos in Texas do better than Latinos in California. It is on many metrics of basic achievement and success — at least if you’re among those who think dependency on government is a bad thing.

Gonzalez’s work helps with key context for the California vs. Texas debate. Another piece that does so is Joe Mathews’ exceptional column[4] from this spring about the Texas suburb that might as well be a clone of Irvine. It breaks with what I see as a stale debate:

It’s insanely annoying how so many California defenders simply ignore basic facts like Texas is creating more middle-class jobs or that Texas’ Latino and black students do better than California’s in K-12 test scores such as the NAEP.

But it’s also pretty telling that so many Californians who tout Texas don’t acknowledge that for lots and lots of people, California’s lifestyle is so vastly more appealing that they’d rather live in a condo here than a 2,800-foot ranch home there.

Read more about the picture painted by Joe’s column here[5].