Japan’s 50th bullet train anniversary: What it says about CA 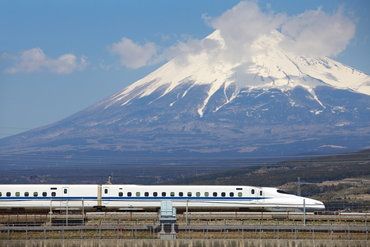 Oct. 1 marked the 50th anniversary of the beginning of commercial operations for Japan’s bullet train system. The Shinkansen is by far the most successful bullet train network in the world. The British press[1] and just about no one else outside of Japan thinks this is a big deal. Of course it is a big deal. Historians see 1964 — with the Summer Olympics being hosted in Tokyo, the debut of the world’s first bullet train linking Tokyo and Osaka, and Japan’s emergence as a consumer electronics giant — as the year in which Western powers realized Japan was an economic and technological juggernaut, not a crippled loser of World War II.

But from a Californian’s perspective, what’s interesting in reading up on the Shinkansen is how strikingly different the approaches are of the Japanese government and California government in their vetting and decision-making processes — how one was so thorough and one was so cursory.

In the past week, I’ve read big chunks[2] of  Cardiff University professor Christopher P. Hood’s 2006 book, “Shinkansen: From Bullet Train to Modern Japan,” as well as contemporaneous newspaper and magazine coverage on Nexis.com.

1. The quality of planning. The Japanese government’s leaders and analysts saw what the U.S. had done with the interstate highway system in the 1950s and were aware that rail was considered passe in some First World nations. But because of densely crowded urban conditions around Tokyo, the extreme cost of land and, well, Japanese conformism, they didn’t believe a U.S.-style car culture would emerge — but that a fast train network would have huge appeal. Key point the rest of the world doesn’t know: Japanese companies pay employee commuting costs. Think what a gigantic distortion that would have on how a government would approach the bullet-train debate and transportation in general were that the CA norm.

California’s planning was horrible. It was based on such insane claims as this: The California bullet train would eventually carry 4.5 times as many passengers a year (117 million) as Amtrak (26 million), which operates in 46 U.S. states and four Canadian provinces. In the run-up to the 2008 Proposition 1A vote authorizing $9.95 billion in state bond funds as seed money for the project, state leaders made up stuff as they went along about ridership, ticket cost and job-creation effects. They may have even believed what they were saying.

2. Honesty about who would pay. It wasn’t even debated in Japan — everyone accepted that a huge infrastructure project would require massive government subsidies. In California, from day one, we’ve been encouraged to pretend that there would be vast interest from private-sector investors despite a law that bans revenue or ridership guarantees that are de facto promises of subsidies. Such guarantees are the only way there would actually be private-sector investment interest.

Here’s another interesting angle about government ethics and the Shinkansen. As Japan has expanded the project far from its original Osaka-Tokyo configuration, it’s made conscious decisions to add distant cities that wouldn’t have heavy enough ridership to break even on operating costs. Why? To make it seem like a national system[3], not one limited to privileged areas.

There’s not a single area of the bullet train project in California where officials have been remotely as honest about how they made tough but potentially unpopular decisions. Instead, we see Jerry Brown’s pathetic drivel in which he mocks all skeptics as “declinists.”

3. Government competence. Japan by and large avoided Big Dig-like construction debacles while building a system so good at moving people around central Japan that much of the country feels like a Tokyo bedroom community. It carries 300 million passengers a year and some segments make big operating profits.

In California, there is scarcely any evidence of comparable government competence. There are 10,000 examples, but one tells the whole story.

The main reason to have a bullet train is to swiftly and conveniently move a person from Point A to Point B.

But in the Golden State — under a plan that Jerry billed as saving the project from a public backlash by cutting its cost from $98 billion to $68 billion — a traveler on the bullet train network going from San Francisco to Los Angeles wouldn’t have such a straightforward journey. She would have to go from Point A to Point B to Point C to Point D.

Part one: Going on regular rail from San Francisco to Fresno.

Part two: Going on an actual bullet train from Fresno to the northern edge of the Los Angeles County exurbs.

So the first hour and the last hour of the San Francisco-L.A. trip wouldn’t even be a bullet train experience.

So am I saying if the  shrewd Japanese government of the 1950s and 1960s had overseen Cali’s project, we’d be seeing much more defensible and reasonable results?

Not in the slightest.

Japanese leaders would have realized how stupid it is to push for a bullet train network in a spread-out state that symbolizes sprawl[4] to the world. Not our numbskulls.