Biden due in L.A. to tout minimum-wage hike — commuters, beware 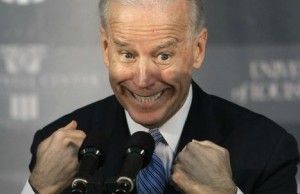 Monday, Joe Biden was in Nevada[1] touting a hike in the minimum wage as the key to fighting income inequality. Today, the vice president will be in Los Angeles with Mayor Eric Garcetti offering the same spiel before heading to a Bakersfield fundraiser.

But there are a few problems with this narrative in the Golden State. For starters, the high cost of housing is at least as responsible as stagnant wages for California having the nation’s highest poverty rate. The federal minimum wage could double from the present $7.25, and poverty would still be sky-high here so long as mediocre one-bedroom apartments rent for $1,200 a month or more in urban areas.

What would bring down the cost of housing? Adding more housing stock by limiting regulations blocking new construction and incentivizing developers to build mixes of middle-income and lower-income housing.

Will CA Dems ever do that? Of course not. Growth is evil, yunno. Even if opposing it hurts poor people. Gaia must be honored.

But where the Democrats’ posturing on income inequality is most unhelpful is with public education. If we wanted to create middle-class opportunities galore for kids in poor communities, we would mandate that they take computer science in high school. I wrote about this angle[2] in March:

Even if minimum-wage hikes don’t kill jobs, the idea that this policy is a promising solution to income inequality makes little sense. In the big picture, what we need are many more people with in-demand job skills that lead to middle-income careers. And what we badly need from our elected leaders is an acknowledgment that California’s approach isn’t working in creating these job skills.

Income inequality isn’t just growing in the U.S. It’s growing in all advanced nations as technological advances wipe out middle-class jobs by the millions. It’s growing everywhere as the job marketplace increasingly values — and strongly rewards — a narrower range of skills than it did previously.

The best way to minimize the disruption this inexorable change creates is by maximizing the number of people with job skills not diminished by “creative destruction.” For starters, we need a focus on computer science and technological expertise in middle school and high school — not curriculums based on the educational values of the 1950s. We also need to make it much easier for displaced workers of any age to go back to the classroom to get practical job training.

Pursuing this ambitious agenda would be far more daunting than raising the minimum wage. But it has promise to significantly reduce income inequality — not nibble at the margins.

Will Biden make this point? Or just posture with Occupy-style rhetoric about the 1 percent?

You know the answer. President Obama may have a good record of calling for incompetent teachers to get the boot, but he has had little to say about the urgent need to revamp high-school graduation requirements for the 21st century.

Why? It’s tough not to think that it’s because it would cost 10 percent or more of high-school teachers their jobs. Never forget that the main opposition in New York state in the late 1990s to ending or scaling back failed bilingual education policies came from teacher union leaders who were upset it would mean pink slips for many “Spanish immersion” teachers.

Meanwhile, Angelenos once again will face a traffic nightmare today because of Biden’s visit[3] and the Obama administration’s latest Socal money-grubbing. Joe Mathews had an enjoyably tart take[4] on this last week:

Mr. President, I realize such a statement may seem jarring. After all, our state voted for you twice. When you were first running for president, Maria Shriver said, “If Barack Obama were a state, he’d be California.” But these days, I bet I could rally a majority of Californians behind a proposition asking that you never visit again. And I wouldn’t even have to talk about your record-low job approval ratings among Californians.

No, our fundamental problem with you is more personal than political. You, sir, have developed a reputation as a very poor houseguest.

You often show up with little warning about your itinerary or schedule. (Your excuse? That the Secret Service can’t disclose your movements for security reasons.) Your massive security cordon routinely causes hours-long traffic jams in a state that already has too many of them. I was once two hours late picking up a child from day care because you just had to stop for takeout in Los Angeles during the evening rush hour.

Mathews makes this case that this might be more palatable if the president actually seemed familiar with and eager to address California issues. But Obama doesn’t and isn’t.

Your trips here have come to feel like those political fundraising emails that keep arriving this time of year. You’re spamming us, Mr. President. If you can’t do better by California on these trips, then maybe you should stop visiting.

This isn’t the first time Joe Mathews has griped about such inconveniences. Here he also takes a shot at George Clooney[5]. Now he’s really getting too big for his britches.