In San Diego, how low will foes of gay GOP candidate go? 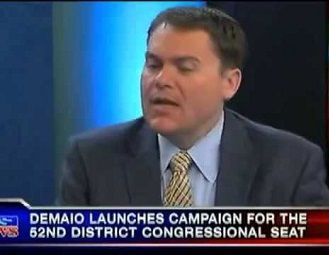 The 2008 election of gay libertarian firebrand Carl DeMaio to the San Diego City Council absolutely drove the city’s Democratic machine insane. When it came to tearing DeMaio down, it was anything goes.

No one of any Dem stature ever said anything when a police officer union member identified Republican DeMaio on his blog with a pink signifier. No Dem insider ever said anything publicly about Bob Filner’s repulsive attempts throughout the 2012 mayoral campaign to remind voters that “hey, Carl’s gay!” Or to repudiate recent DUI arrestee Ben Hueso’s X-rated, unsubstantiated allegations about what DeMaio purportedly did in the bathrooms of City Hall.

Tolerance is not required when it doesn’t suit Democrats or their de facto media allies, even those most likely to moralize about bigotry. Instead, 1940s-style sniggering about sexuality is fine when the target is a Republican. Shades of the way Democrats shrug off Harry Reid’s and others’ racially charged[1] criticism of Supreme Court Justice Clarence Thomas’ intelligence, even though legal blogs across the spectrum consider him a better writer and a more interesting legal mind[2] than most of his colleagues.

Now San Diego machine Democrats — and Democrats in East Coast Super PACs flooding San Diego’s airwaves with hit ads — will have to decide whether to use outrageous new allegations against DeMaio. As a sign of how important the national parties consider the 52nd Congressional District race pitting DeMaio and first-term incumbent Scott Peters, Politico covered the scandal as it broke[3]:

A high-profile Southern California congressional race descended into chaos on Wednesday when Republican Carl DeMaio was peppered with questions from reporters about whether he had sexually harassed and then intimidated and attempted to bribe a former campaign staffer.

At a news conference at his campaign headquarters, DeMaio called the allegations “absolutely untrue” and a “complete lie.” He added that authorities had questioned him and his campaign staff about the harassment claims, concluded they were unfounded and closed the case. DeMaio, 40, said the accuser concocted the story after he was identified as a “prime suspect” in a break-in at DeMaio’s campaign office last spring.

“All the evidence that was collected by the police department clearly indicated this individual was the prime suspect, and, it’s unfortunate, but we will continue to allow the district attorney to proceed with her case and weighing the case to prosecute for the break-in of our office,” said DeMaio, a former San Diego city councilman trying to unseat Rep. Scott Peters (D-Calif.) in one of the nation’s most competitive House races.

What I’m hearing as a San Diego journo is that DeMaio is on solid ground in denying everything. That appears to be what Peters believes as well. He didn’t bring up[4] the allegations at a Thursday debate.

But, hey, it’s been reported on. I expect the attack ads by Friday afternoon at the latest.

Democrats can’t wait to insinuate a gay Republican is a reprobate.