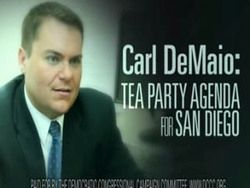 [1]The nationally watched race for a swing seat between Rep. Scott Peters, D-San Diego, and former San Diego Councilman Carl DeMaio is currently in a roiled state because of lewd allegations made against DeMaio by a former staffer whom DeMaio says is suspected in the burglary of his campaign headquarters. But at least on the TV airwaves, the themes of Peters, the national Democratic Party and super PACs endorsing the one-term incumbent have never varied: DeMaio is a threat to America because of what they call his “Tea Party values” — which they say make DeMaio want to cut student loans, imperil pension benefits for widows of dead cops, and prevent government from helping you deal with life’s vicissitudes, etc.

Obviously, there’s been focus-group testing galore that leads Dems to think this theme is powerful and resonates with independent voters. And so the decision to make the race a referendum on the Tea Party.

But the 52nd congressional district isn’t West Los Angeles or Marin County. It covers mostly affluent coastal and northern San Diego and went decisively for Mitt Romney, a part-time resident of the district, in 2012.

And given the fact that DeMaio is gay, the usual tactic of depicting tea party members as social conservative extremists doesn’t work so well — the “war on women” shtick, etc. Here’s an example of this framing, a Washington Post story[2] headlined “Social conservatives are mobilizing in France, leading to talk of a tea party.”

It’s quite possible that Democrats and some in the media actually don’t realize that the Tea Party is fundamentally libertarian — devoted to liberty and small government — and is not a conspiracy-mongering birther front. When the only people you listen to are those on MSNBC and Daily Kos, and Paul Krugman, you’re inclined to see all Republicans as contemptible haters.

Tea Party no fan of GOP establishment’s views on immigration

Yet the more sophisticated observers get that the Tea Party really is at odds[3] with the modern GOP establishment — not just on its habit of giving in and accepting the big-spending federal status quo but on immigration. This isn’t just an anecdote-based claim. This info is from Thomas Edsall[4], the veteran journalist who for decades has actually tried to bring political science research into political journalism:

Tea Party members I’ve talked with often say they back higher immigration — but with a Canada-style approach valuing applicants with needed job skills, not a system in which immigrants essentially self-select.

DeMaio is in the real-border-security-first[5] camp.

But he’s not making it a key theme in this very interesting congressional race.

Here’s a Breitbart account[6] of how DeMaio is responding to the Tea Party narrative: by ridiculing it.