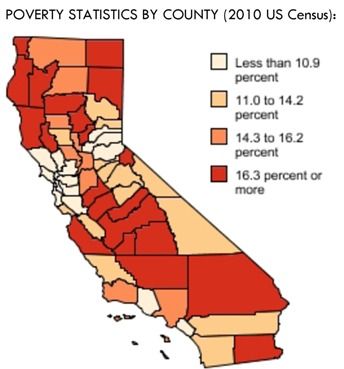 For decades, economists have complained about the stupidity of the Census Bureau’s annual report on poverty in the U.S. because it didn’t include cost of living in its rankings of the 50 states. An example of the old stats can be seen at right. Hilariously enough, the graphic based on the 2010 census shows less than 11 percent poverty in the Bay Area, Ventura County and Orange County.

But beginning in fall 2012, the bureau finally began providing such analysis in what it called a “supplemental” poverty analysis. In that report, the one that came out in 2013 and the one that came out last week[1], California had by a wide margin the highest poverty rate of any state. Here’s part of Dan Walters’ short take[2] on it:

California continues to have – by far – the nation’s highest level of poverty under an alternative method devised by the Census Bureau that takes into account both broader measures of income and the cost of living.

Nearly a quarter of the state’s 38 million residents (8.9 million) live in poverty, a new Census Bureau report says, a level virtually unchanged since the agency first began reporting on the method’s effects.

Under the traditional method of gauging poverty, adopted a half-century ago, California’s rate is 16 percent (6.1 million residents), somewhat above the national rate of 14.9 percent but by no means the highest. That dubious honor goes to New Mexico at 21.5 percent.

But under the alternative method, California rises to the top at 23.4 percent while New Mexico drops to 16 percent and other states decline to as low as 8.7 percent in Iowa.

Mississippi spurs deep concern — CA, not so much

Will the California media ever forcefully point this out — like, yunno, the folks who have written about Mississippi? Here’s an example[3] of the oh-my-god-it’s-awful treatment that Mississippi gets for its poverty, which is small compared to California’s:

Many families in Mississippi, one of the states where ChildFund works, live below the poverty line, presenting obstacles to children achieving happy and fulfilling lives. In 2013, the federal poverty level for a family of five is a yearly income of $27,570. As of January 2011, about 31 percent of the children living in Mississippi were considered poor, and included in that number were 14 percent living in extreme poverty, according to the Children’s Defense Fund. This means Mississippi has the highest child poverty rate in the nation.

By living in these conditions, children are more likely to face other challenges throughout their lives, such as neglect and abuse, as well as insufficient access to the education they need to succeed.

Although there are many factors that can contribute to child abuse and neglect, the U.S. Department of Health and Human Services notes that many researchers feel there is a correlation between poverty and child mistreatment.Mississippi has historically seen both high poverty and child abuse rates.

In 2011, the Children’s Defense Fund reported that 7,883 Mississippi children were victims of abuse or neglect, which works out to a case of abuse or neglect every hour. Some children in Mississippi are unable to live with their biological parents for a variety of reasons. In 2011, about 3,320 children were in foster care, and about 50,130 grandparents across the state raised their grandchildren.

Children who are raised in poverty are also statistically less likely to finish high school than their peers, frequently because they are forced to get a full-time job, or they lack crucial support from their families. In Mississippi, about 64 percent of freshmen in high school will graduate, according to the Children’s Defense Fund.

Haven’t seen much downbeat stuff like this about life in Cali, have ya?

Just like the knuckleheads who cover baseball and mock Moneyball, news journalists resist new stats, even if they’re more insightful.