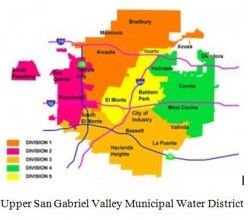 Will next year bring restrictions to water use in Southern California that cause people’s yards to go brown and die?

Could be, if the Southland suffers a worst-case scenario of low rainfall and no imported water, Tony Zampiello told CalWatchdog.com; he’s watermaster for the Upper San Gabriel Valley Municipal Water District[1] – called the Upper District.

On Oct. 22, the Upper District declared a water supply emergency[2], citing the lack of deliveries of imported water and sparse rainfall. Zampiello said there may be enough water for essential human needs, but only if the public takes this “unprecedented drought” seriously and entirely curtails residential landscape watering.

Before this, some small rural towns in California’s Central Valley, such as East Porterville[3], have run out of water because they are isolated from the State Water Project.

But the Upper District’s emergency is important because it’s one of the state’s first suburban water districts to declare an emergency. Also surprising is that it depends on groundwater to meet 80 percent of its normal supply and only 20 percent from imports from the Sacramento Delta or Colorado River.

Imagine what a critical situation other Southern California cities will be in for 2015[4]. Here are percentages of water from imports[5]:

The Upper District is a suburban water-wholesaler that conveys water to 18 cities and 21 water providers in the San Gabriel Valley.  It buys its imported water from the MWD[8], supplying drought water to six counties in the southern third of the state, serving 19 million people.

In 2014, the MWD vastly cut back its deliveries of imported water to the Upper District and other water agencies and expects to do the same in 2015.  Zampiello said the Upper District needs to buy enough supplemental water from the MWD to make it through 2015 to supply 150,000 people.

The MWD was allocated only 5 percent[11] of its contracted water from the California State Water Project in 2014 to pass through to its member agencies.

The Upper District is currently trying to buy about 50,000 acre-feet of surplus Colorado River water stored in Lake Mead from the MWD at $300 per acre-foot, plus pumping and treating costs, for next year.

Policies of watering lawns only three times a week won’t be any help for 2015.  The only “saving grace,” said Zampiello, is there still is a lot of “outside water” that can be cut altogether.  Zampiello said he stopped watering his lawn, which cut his water bill by about 50 percent.

To compound matters, the Upper District depends on 8 to 10 percent per year cyclical “return flow” of imported water back into the District from watering lawns and vegetation.

Ironically, if all such “lawn water” (not his phrase) is reduced this year by residential customers, there won’t be “return flow” at all and the District’s water level may drop from its current level of 181-feet above mean sea level. If the level drops to 160 feet, the Upper District’s water wells go dry.

Zampiello described conservation as “trying to get a second bite out of the apple” because homeowners have already cut back water use.  This is called “demand hardening”[12] by water planners, defined as the removal of slack of water supply in the system, limiting the ability to reduce demand further in a drought (page 11 here[13]).  Arcadia, Glendora, Monrovia, San Gabriel and South Pasadena, all within the Upper District, already have cut water usage 20 percent[14] in 2010.

Part of the problem, said Zampiello, is that many people don’t believe the drought is real.  And even if it rains two consecutive wet years, that won’t be enough to maintain water levels if three dry years follow.

So consumers shouldn’t relax conservation efforts even if there is substantial rainfall this winter. Zampiello said the most important message to get out is that residential water customers need to take the drought seriously.

Southern California will have enough water to meet essential water demands for 2015, but only if “lawn water” for residential landscaping is entirely reduced. Zampiello sounded unsure if Southern Californians were ready to adjust to this reality.