Enviros battle over merits of rooftop solar vs. desert solar 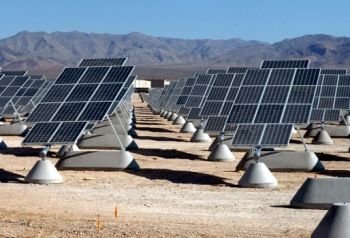 This is reflected in the furious reaction of Chris Clarke[1] — who writes the popular Rewire[2] blog for public television station KCET-Los Angeles — to the new 6,000-page Federal Desert Renewable Energy Conservation Plan[3]. According to Clarke, under the plan, the U.S. government would allow[4] building some 54 massive new solar power plants in the Mojave Desert, turning 22 million acres into an industrialized desert landscape that fries birds[5] and ruins habitat for other desert creatures.

In an Oct. 23 post at Rewire titled “California’s Renewable Energy Plan Misses the Point on Renewable Energy,” Clarke wrote that he thought that large solar power plants requiring costly new transmission lines would be economically “obsolete” by now.  In their place, he envisioned there would be millions of purportedly cheaper home rooftop solar energy systems not requiring transmission lines.

He asserts that “half of all rooftop solar projects installed in the state have been brought online without state subsidies.” He argues that rooftop solar power is now so “cost-competitive” with conventional natural gas-fired power plants that no more large desert solar plants are necessary.

About 150,000 home rooftop solar systems[6] have been installed in California, according to Clarke.

How subsidies help some households more than others

But Clarke, like many greens with big plans, describes a world that doesn’t exist. Another high-profile environmentalist — one with much stronger scientific credentials — has a sharply different view of the economics of rooftop solar power, and the evidence to back his views.

Severin Borenstein, head of the UC Berkeley Energy Institute, completed a study[7] in 2013 for the California Public Utilities Commission, reporting that 118,303 rooftop solar installations under the state’s “Million Solar Roofs” program received deep subsidies.  He estimated that lifetime rooftop solar installation costs were $86,000 to $91,000 but the electricity produced would only be worth $19,000 to $51,000, reflecting a subsidy of $40,000 to $67,000 per system.

Borenstein[8] has recently come out opposed to an emphasis on solar rooftop energy.  He says rooftop solar power allows larger households of all income groups to use all the power they want at the expense of smaller sized households for whom solar power would be uneconomic because they don’t use enough electricity.

This cost shifting isn’t done with hard subsidies or even tax credits but with tiered power rates that supposedly spur large electricity users to conserve electricity.

A survey of prices for different energy-producing technologies conducted by this writer[9] corroborated Borenstein’s reasons for opposing rooftop solar power. The only reason that rooftop solar power appears cost-competitive is that the top three tiers of electricity rates artificially charge up to 25 cents per kilowatt-hour while so-called “unsubsidized” rooftop solar energy costs about half that much at 12 cents per hour.  Small non-solar powered households are picking up the tab for the 13-cent difference.  Smaller households don’t feel it too much in their monthly electricity bills, however, because only 2 percent[10] of all California households have rooftop solar systems (150,000[11] out of 7,949,196[12] single-family residential households in California).

In other words, the subsidies for rooftop solar power are hidden in the stepped-up electricity rates set by the state Legislature and the CPUC.

Disputes among environmentalists over how to bring more renewable energy to California are certain to continue and probably will intensify. The gaps are too big between what idealists like Clarke and what pragmatists like Borenstein think is practical.