Part of bullet-train legal mystery may be answered 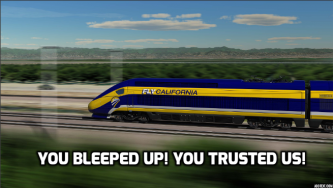 For close followers of the bullet-train saga, one of the most basic mysteries of recent years has been what happened after Sacramento Superior Court Judge Michael Kenny’s tentative ruling in August 2013 that blocked the state from starting construction on the first segment of the project.

After his ruling, the state was expected to either contest his conclusions or offer remedies to allay his concerns. Instead, the state’s remedies brief, released in October 2013, offered no remedies.

I wrote about this odd development here[1]:

Kenny held that the state failed to meet mandates that construction could not begin until the state had both a solid financing plan and all environmental clearances for the project’s entire initial operating segment — a 300-mile span from Merced to the San Fernando Valley.

The segment’s cost is estimated at $31 billion, more than double the $13 billion in combined state and federal funds available for the project. Given the state’s inability to attract private financing without the revenue or ridership guarantees that are banned by Proposition 1A and the drying up of federal funds, this appears to doom the venture.

In a 20-page brief filed Friday, Attorney General Kamala Harris and her staff didn’t challenge Kenny’s conclusion that the project’s financial and environmental deficiencies broke state law. Instead, the brief contended that nothing the rail authority had done so far violated Proposition 1A because federal funds had been used instead of state bond funds on certain expenditures.

“It ignores the fundamental basis of the [Aug. 16] decision,” said Mike Brady, attorney for Kings County and two Central Valley landowners, plaintiffs in the lawsuit before Kenny.

This month, however, we may have gotten an answer as to why the state didn’t think compliance with state environmental rules mattered. This is from the Fresno Bee[2].

The California High-Speed Rail Authority is facing seven lawsuits over its approval of the Fresno-Bakersfield segment of its statewide bullet-train line. Now the agency is asking the federal Surface Transportation Board — which oversees rail lines in the U.S. and gave a green light to the project over the summer — to declare that those lawsuits should not be able to seek a California judge’s order to block construction.

The authority’s petition to the federal board, filed earlier this month, [argues] that federal jurisdiction over the project essentially overrides portions of the California Environmental Quality Act. The lawsuits challenging the state’s approval of the Fresno-Bakersfield segment allege that the state’s environmental analysis of the route was inadequate and does not provide enough measures to make up for anticipated harm to residents, farmers, businesses and communities along the route.

The Surface Transportation Board[3], made up of three presidential appointees, is giving project supporters and opponents until Nov. 6 to respond to the rail authority’s petition.

But even if federal jurisdiction trumps state law, this is still outrageous. As I detail in this editorial[4] for U-T San Diego, voters were promised in 2008 that CEQA would be followed.

If this tactic works, however, Gov. Jerry Brown and the rail authority still have to at some point “remedy” the other shortcoming identified by Kenny: the lack of a solid funding source to pay for the $31 billion initial operating segment.

That’s not nearly as easy to finesse as the environmental approvals. That’s a lot of money — money that’s not forthcoming from the federal government or from the contractors that rail authority officials ludicrously describe[5] as potential investors.