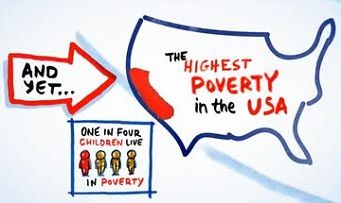 This is because no one wants to take positions sharply at odds with the media status quo. But on Friday, Jessica Calefati of the San Jose Mercury-News did just that[1] on state poverty.

For two years, the U.S. Census Bureau has been reporting that based on a new measure of poverty adjusted for cost of living, California has by far the nation’s highest poverty rate. But while I’ve written about this for the U-T San Diego’s editorial page, Dan Walters has referred to it in some columns and Chris Cadelago mentioned it in a Capitol Alert brief for the Sac Bee, the stat hasn’t become part of the mainstream California media narrative about life in the Golden State.

Why? That pack mentality.

I’ve whined a lot about Calefati over her coverage of the bullet train. She buys the Dan Richard myth that would-be contractors are potential investors[2], never looking at the contractors’ history, and doesn’t appear to have read the appellate court ruling[3] on the bullet train that provides zero long-term relief[4] from Prop 1A’s restrictions. But on poverty, she’s nailed it. From now on, it’s going to be awfully difficult for other reporters writing broadly about California quality of life to leave out the mass poverty angle.

“By some measures, California seems to be doing really well, but these measures are deceptive,” said Jack Pitney, a political expert at Claremont McKenna College. “So much of the good fortune is being blown to the affluent — and a lot of Californians are getting left behind.”

The state’s official poverty rate of 14.9 percent is just slightly higher than the national average. It’s decreased from a high of 16.9 percent in 2011, yet it remains stubbornly higher than it was before the Great Recession began, according to U.S. Census data.

But those figures don’t tell the whole story. According to another set of Census statistics that takes the cost of living into account when calculating need, California’s poverty rate is 23.4 percent — the highest in the nation. …

But Calefati doesn’t just point out how extreme poverty is. She notes how badly poor people have fared under the state budgets shaped by Gov. Jerry Brown. She cites program cuts and then offers this broad appraisal of how the gov thinks:

Brown, stemming in part from the former seminarian’s Jesuit background, also seems to have a distaste for handing out cash to able-bodied people. He has said that the investments he made in public education and subsidized health care for the poor are among the best ways to help people climb out of poverty.

“There’s no single measure of poverty and there’s certainly no single action — or government program — that will eliminate it, which is why the administration is moving on multiple fronts to help Californians in need,” said Evan Westrup, the governor’s chief spokesman. …

Sen. Holly Mitchell, D-Los Angeles, said she appreciates Brown pushing for the minimum wage hike but argues that he has shied away from tackling the state’s poverty problem head-on.

“The governor likes to describe this state as a laboratory of innovation,” she added. “It’s the people who make California an innovator, not just the coast line and the palm trees. If we don’t invest in our children’s well-being, who will be left to innovate?”

But termed-out Sen. Darrell Steinberg, a liberal Sacramento Democrat who led the state Senate for six years, isn’t optimistic that social service spending in California will soon be the same again — as a coalition of Republicans and moderate Democrats like Brown resist going on the kind of spending binge that led to the multibillion-dollar deficits.

“The thing about budget cuts is once they’re made it’s very difficult to restore them dollar for dollar,” he said. “It just is.”

That’s the last paragraph of Calefati’s story. Any journalism forensics technician will tell you the last graph of a long analysis is what the reporter (or line editor) thinks about the facts that have been presented.

A radical break with usual kumbaya coverage of Jerry

So here’s what the Merc News front page says: California is the poorest state in America, and Jerry Brown doesn’t care all that much.

What a remarkable difference from Brown’s (and the media’s) normal narrative of “California’s on the rebound! California’s got its mojo back!”

That narrative looks idiotic when the media actually report that due to high housing prices, California is the Mississippi of the 21st century.