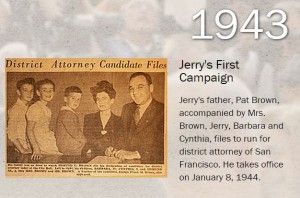 Successful politicians never accept defeat. So it’s not surprising — but still a little startling — that Gov. Jerry Brown is not dumping his high-speed rail project in the junk yard after the Nov. 4 victories of its Republican opponents.

He just said[1] Republicans were “going to join the chorus” for the project. “Maybe even some of the Republican congressmen will have to see the wisdom of high-speed rail.”

No question it’s going to be a tough ride. As CalWatchdog.com reported yesterday[2], the increased GOP majority in the House of Representatives and the party’s takeover of the Senate don’t bode well for federal funding of the train.

Yet Brown’s comment alluded to a future trade where farm Republicans would “join the chorus” to get water from his $7.5 billion water bond voters just passed as Proposition 1[3].

That’s because standing in the way of funding for any future water reservoir projects is the California Water Commission[4], a nine-member panel hand-picked by Brown. It is not a lock that any of the $2.7 billion[5] in matching funds allocated for reservoir projects in the water bond will ever be built.

One of the most powerful opponents to federal funding for Brown’s bullet train is Rep. Jeff Denham[6], R-Atwater, who represents the agricultural kingdoms of Madera, Merced, Monterey, San Benito and Stanislaus counties. Denham is one of the key GOP members addressing California’s drought[7]. Denham also strategically chairs[8] the House Subcommittee on Railroads, Pipelines and Hazardous Materials, which authorizes federal funding for rail projects.

To make matters worse for Brown, Rep. Kevin McCarthy[9], R-Bakersfield, earlier this year became House majority leader and is strongly opposed to the rail project. Rep. Devin Nunes[10], R-Visalia, is yet another Central California Republican congressman opposed to the project.

But Brown’s experience in California politics dates back, incredibly, to the 1943 — 71 years ago — when he campaigned with his father, Pat Brown, later himself a governor. At the top of this story is a picture from Jerry Brown’s 2014 campaign website[11].

Although difficult, Brown might try to get at least some federal money for high-speed rail by getting Democrat and Republican congressmen to work for federal funding for water. In political circles everywhere, it’s called “horse-trading.” And everybody knows horses need water.

Republicans in the House passed an ambitious bill[12], H.R. 3984, the Sacramento-San Joaquin Valley Emergency Water Delivery Act[13], by Rep. David Valadao, R-Hanford. The bill would repeal a 1992 law that diverted more water to the Delta for fish, abolish wild-and-scenic river status from a stretch of the Merced River and authorize new water storage projects. The Democratic-controlled Senate has blocked the bill’s passage.

In the U.S. Senate, which the GOP will take over in January, California’s two Democratic senators, Dianne Feinstein and Barbara Boxer, have been working with Republican congressmen for months on a compromise federal water bill[14], their Water in the 21st Century Act[15], which stressed water conservation more than adding to water supplies.

In September, Rep. Tom McClintock[16], R-El Dorado Hills, got the House Natural Resources Committee to pass three bills[17] that would streamline the permitting and funding process for both federal and state water storage projects:

These bills could now advance in the GOP-controlled Senate.

But even if the bills pass both houses of Congress, they still must be signed by President Obama, a Democrat who also is adept at horse trading, and who needs more than ever strong national allies such as Brown.

Congress is scheduled to reconvene on Nov. 12.[18]

Federal funding for Brown’s bullet-train is still a long-shot. But use whatever cliche you want — “horse-trading,” “politics makes strange bedfellows,” “go along to get along,” “join the chorus” — it just might happen.