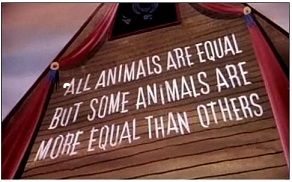 The California Teachers Association and the California Federation of Teachers do a good job of promoting the narrative that state teacher pensions are very modest at best. It’s true that there aren’t the same type of outrageous stories that we see in local and state government about police chiefs, fire battalion commanders and city managers retiring with an annual benefit of $200,000 or more. But this narrative is somewhat undercut by a new CalSTRS’ demographic analysis. Calpensions.com has details[1].

A new look at how CalSTRS members changed during the last 15 years shows the average teacher working fewer years, retiring at an older age and collecting a pension that grew faster than pay or inflation.

Retirees grew much faster during the period than active workers, increasing from 27 percent to 36 percent of total membership and raising questions about the impact of longer life spans on projected pension costs.

A brief pension fund surplus helped prompt legislation in the late 1990s and 2000 that increased pension benefits in several ways, while also cutting the annual employer and employee contributions to the pension fund.

Some public employees are more equal than others

At least compared with public safety retirees’ pensions, those pensions look reasonable. But as with the oft-touted claim that the average CalPERS pension is under $30,000, the number needs context. It includes anyone who ever became eligible for a CalSTRS pension — $48,904 is the average for all teachers in the retirement system. But what about teachers who worked 30 years or 35 years, as is common? What is their average pension? That’s the number that’s more telling on the question of fairness.

And the CTA and CFT are never going to convince other public employees that their pensions are fair. Under Gov. Jerry Brown’s initial 2011 pension reform proposal, the state would have been legally committed to having employees share an equal or much closer to equal share of total pension costs by the end of the decade. That got watered down. But what was adopted in 2012 still committed public employees to paying a great share of pension costs.

Except for teachers. The CalSTRS funding overhaul approved earlier this year actually reduced teachers’ relative share of their pension costs. I wrote about this for CalWatchdog here[2].

The theory was that if employees had to share equally in the huge cost of their pensions, they’d be more amenable to plans to reduce them going forward so as to increase their take-home pay.

But when it came to enforcing this provision — and triggering a fight with the CTA and the CFT — Brown sized up the Sacramento landscape and doesn’t appear to have even tried. The provision in his 2014-15 budget shoring up funding for the California State Teachers’ Retirement System requires that taxpayers foot 90 percent of the [new additional contributions to CalSTRS] and teachers just 10 percent.

It’s an “Animal Farm” thing, you see. Some public employees are more equal than others.

I’ve never seen this special treatment for teachers over public employees detailed in an MSM newspaper story. It’s one more juicy story that the Sacramento set chooses to ignore.

(Editor’s note: The description of the 2012 pension law was corrected after a reader pointed out problems with the original version.)