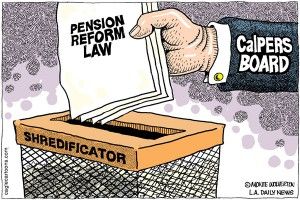 The public pensions crisis has not subsided in California — nor has the conflict that surrounds it. A waves of political, legal and policy developments have kept the issue at the center of the state’s attention. In addition to a key election and a closely-watched lawsuit, a new initiative out of Sacramento has focused the pension debate on three general areas: municipal law, state law and public opinion.

Of the several California cities where pension reform emerged as the sharpest political issue, San Jose faced some of the most pointed combat. Pension reform drove this month’s close election for mayor, which pitted Supervisor Dave Cortese — the union-backed candidate — against Councilman Sam Liccardo, who was allied to outgoing Mayor Chuck Reed.

The lines were the city’s pension reforms in Measure B[1], approved by over two-thirds of San Jose voters in 2012. As The Wall Street Journal observed, however, Liccardo’s Democratic pedigree was 德州扑克在线游戏[2] enough to help turn back Cortese’s challenges to the Reed legacy.

According[3] to the Journal, “San Jose’s pension reforms are among the boldest in the country because they modify benefits for current workers in addition to future hires.” In the world of pension policy, that approach has sparked a virtual panic among defenders of the status quo. Wherever such changes have been proposed, critics have warned that public-sector employees would essentially abandon their jobs; in San Jose, reported the Journal, “the city’s police union faulted the pension reforms for a putative ‘exodus’ of officers and a crime wave,” even though “property and violent crime rates have fallen since 2012.”

Liccardo recently put an optimistic face on his goal of fully funding annual health care obligations for retirees. He saw “plenty of common ground,” he told[4] KQED. “We have new opportunities going forward, and I’ll be talking with the heads of our police union and certainly with the rank and file about how we can find common ground.” But Reed cautioned  he expects more union-driven legal challenges ahead.

A tug of war in Stockton

Although smaller in size than San Jose, Stockton’s battles over pensions have also been closely watched, on account of the city’s struggle through bankruptcy proceedings. A recent pair of rulings by bankruptcy judge Christopher Klein heightened the drama surrounding Stockton’s attempts to meet its pension obligations with a minimum of fuss.

First, Klein held that it would be unconstitutional should pension funds go completely untouched against a city’s will. But then he ruled  Stockton’s planned agreement on the bankruptcy was properly structured, despite leaving pensions largely intact.

The careful decision left reform opponents with half a loaf: on the one hand, cities had the right to touch pensions, violating the unofficial so-called “California Rule” that traditionally kept them sacrosanct; but on the other, the California Public Employee Retirement System, which filed legal objections to any pension changes, was basically free and clear.

Stockton’s private creditors, by contrast, took a big haircut — a setback all of them accepted, with one exception. Upsetting Stockton’s delicate balance of interests, Franklin Templeton Investments has filed an appeal of Klein’s second ruling. With a total of $36 million in loans sunken into Stockton — which has paid CalPERS $29 million a year and counting — Franklin was set to receive just 12 cents per dollar on its investments, according to the city’s bankruptcy plan, according[5] to the Sacramento Bee.

Echoing the dire predictions made in San Jose, the Bee reported, Stockton city officials and CalPERS warned that cutting pensions would touch off a “mass exodus by police officers and other city workers.” Franklin, however, argued  there simply wasn’t adequate proof that pension revisions would collapse key public services — and that basic fairness required its share of the bankruptcy burden be lessened. Now, that argument will go to the 9th Circuit Bankruptcy Appellate Panel in Pasadena.

Available at ByTheNumbers.sco.ca.gov[6], the data has given Californians sudden access to about a million items of pension information, from fiscal years 2002-03 to 2012-13, according to the Los Angeles Times.

Announcing the site, the Times reported, Chiang expressed his hope the research would “empower greater citizen participation in how government handles a policy matter which is central to California’s long-term prosperity.”