A University of California Board of Regents committee voted to increase tuition at least 5 percent every year for five years despite widespread objection from students and Governor Jerry Brown.

The vote was 7-2, with Brown, who serves as a member of the board by virtue of his governorship, and Student Regent Sadia Saifuddin voting against the proposal. 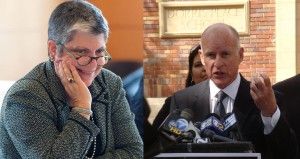 [1] As  more of a formality Thursday the entire Board of Regents will officially approve the proposal.

UC President and Obama Administration alumni Janet Napolitano championed the tuition hikes arguing that doing so was “integral not only to the stability, but also to the vitality, of the University of California.”

At the meeting, Brown made his case against the proposed hikes and called for a rethinking and reorganization of the UC system. He offered an alternative plan to convene a group of experts to transform the UC system to better educate students and serve the needs of California.

Students in attendance protested the vote because they felt they were left out of the discussion by the Regents and became vocal at various points of the meeting. Some students at the meeting called for the resignation of Napolitano[2] and others chanted “Hey hey, ho ho, Napolitano’s got to go.”

Lt. Governor Gavin Newsom defended the students telling reporters students “weren’t part of this process, and they felt dismissed. And they were.” Newsom, like Brown, has opposed the tuition increase.
Governor Brown has said that the UC system would not get additional funds from the state if tuition was increased. He statements will now be put to the test.

What complicates matters further is that many students were under the impression that if the 2012 Prop 30 tax increases were passed, tuition would not be increased. In fact, I experienced this first hand on campus in 2012 when I taught classes at California State University, Fullerton. The vast majority of my students were under the impression that if they did not vote for Prop 30 they would have to pay higher tuition and not be able to afford college—thus they overwhelmingly supported the tax increases.

Prop 30 was passed and now students, at least at the UC, are seeing tuition rise as well. And many feel betrayed.

This story is just beginning to unfold. Brown has made the UC system a priority since taking office, attending Regent meetings unlike his predecessor. Napolitano did not back down to Brown pushing for tuition hikes in, what many believe, was a political move to force Brown to give more state money to the UC system. But what will Brown do next? Stay tuned.