Dems double down on CA for comeback 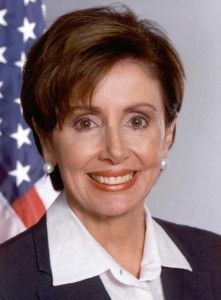 Under the still powerful influence of  Minority Leader Nancy Pelosi, Democrats in the U.S. House of Representatives have turned to the party’s strength in California to see them through the next election cycle and beyond. Despite low popularity ratings nationwide and an unenviable track record leading Democrats to a string of congressional defeats, Pelosi has built a reputation as a formidable fundraiser and canny inside operator.

Even more, however, she has emerged as a symbol of how heavily Democrats rely on their California delegation. The Democrats’ California representatives — much like the party’s two U.S. senators from California, Dianne Feinstein and Barbara Boxer — have combined legislative experience with liberal bona fides to a degree not often present among officeholders from other states.

Although Democrats have long been aware of Pelosi’s weaknesses as a leader, their options for a pivot away from her — and their base of power in California — have been few. After yet another disappointing election this month, some Democrats began to question the wisdom of retaining Pelosi as their party’s leader in the House.

Not only had she failed to win control of the House, Pelosi had seen her own approval ratings erode badly over time. In the most recent Rasmussen poll measuring Pelosi’s unfavorability, she sank[1] to a level lower than both Harry Reid, D-Nev., the Senate majority leader until Republicans take over in January; and current Speaker of the House John Boehner, R-Ohio — both reviled by members of the opposite political party.

Among likely voters, 58 percent expressed an unfavorable opinion of Pelosi; 41 percent described their view as very unfavorable. Just 31 percent gave her a favorable rating; and 9 percent a very favorable one.

Nevertheless, no Democrat conveyed interest in replacing Pelosi. As Jack Pitney observed[2] at the Christian Science Monitor, Pelosi was protected from a challenge, in part, because house minority leader traditionally has been a difficult and unpleasant job. With Pelosi’s fundraising prowess and political ambition still going strong, Democrats faced little incentive to replace her through a divisive, and perhaps embarrassing, internal fight.

In fact, Pelosi herself has already shown little hesitancy in using her own clout to push favorites and allies into what positions of power she could manage. Most recently, a controversy over who would fill the ranking member’s post on the Energy and Commerce Committee put Pelosi’s California-centric approach on full display.

The seat was opened up by the retirement of the committee’s chairman, Rep. Henry Waxman, D-Calif.; and Rep. John Dingell, D-Mich., who was next in seniority. Next in line was Rep. Frank Pallone, D-N.J., who boasted the backing of Minority Whip Steny Hoyer, D-Md.

But Pelosi favored Rep. Anna Eshoo, another Californian and a “fiercely loyal friend,” according[3] to the San Francisco Chronicle. Surprising Democrats, the Chronicle reported, Pelosi sent out a total of three letters pushing Eshoo for the post, ruffling feathers among those who support the seniority system — including “several members of the Congressional Black Caucus,” which has relied on seniority to secure leadership positions.

Compounding the drama, Pelosi flexed her muscle to ensure Eshoo went into the party vote for the post with as great an advantage as possible.

Pelosi was unable, however, to overcome the influence of the Congressional Black Caucus — one group with perhaps even more influence, under certain circumstances, than California Democrats. On the strength of CBC support, Pallone won out over Eshoo.

But as National Journal reported[5], Hoyer refused to describe Pallone’s victory as a “personal” one for him. And Eshoo waved away any suggestion the outcome hinted at a lack of confidence in Pelosi’s leadership.

All told, Democrats have determined to forge ahead with Pelosi and her allies, despite the bumps in the political road.

In an interview with the Los Angeles Times shortly after her Tuesday re-election as Democratic Leader, Pelosi argued[6] the path to recovering control of the House ran through Democrats’ clout in California — and, specifically, her own.

“Thirty-nine members from one state — that’s more than some of the regions that we cover, much less any one state,” she said, referring to the number of Democrats Californians sent to the House this year.

“I take great pride in the fact that when we won the House in 2006, it all began in California.” For now, Democrats are sticking with her as they work to win the House in 2016.