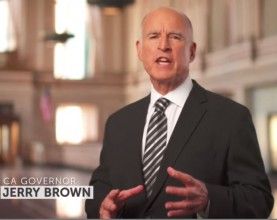 With the 2014 election finally over, attention is turned to possible tax measures on the 2016 ballot.

I previously wrote[1] about groups looking to raise taxes on commercial property, oil extraction and cigarettes; and extending or making permanent 扑克[2] the income-tax piece of Proposition 30[3], which voters passed in 2012.

Marc Lifsher covered similar ground in the Los Angeles Times[4] over the weekend. The Public Policy Institute of California released a poll [5]last night that asked voters about some of the possible tax increases they could face on the ballot.

The key to which major tax measures will advance to the ballot very well could be Gov. Jerry Brown.

It may not seem unusual for proponents of tax increase proposals to want a popular, re-elected governor to support their agenda. However, the key to getting Brown on board is not so much for his endorsement but for his influence with certain powerful political players.

Supporters of proposed tax ballot measures would like to see the same script in 2016.

In the most recent election season, the governor emphasized the Prop. 30 taxes were temporary. He also warned against taking on Proposition 13 [6]and its property-tax protections, which voters passed in 1978 during his first stint as governor.

While Prop. 13 was not tested in the new PPIC poll, Prop. 30’s extension received support from 52 percent of likely voters, while 43 percent were opposed.

Pro-tax advocates will have to convince the governor they have a winning measure. Then they will push for the governor to use his influence with the business community to hold fire on whichever measure – or measures – move forward.

This is particularly true with the major tax issues, less so with so-called sin taxes[7] on proscribed goods or services, such as the tax on cigarettes.

There is also the issue of a major overhaul of the tax system that has support from some reformers.

Any group considering pushing a tax increase in 2016 will have to consider how the governor plans to use his influence on the issue.