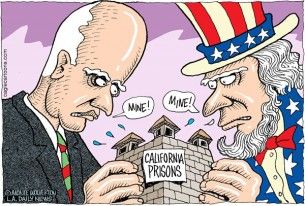 Pushed by the courts to thin out California’s state prisons, Gov. Jerry Brown has imposed a cascade of burdens on the county jails required to receive waves of inmates.

The latest of these has caused extra heartburn for county sheriffs — a sharp uptick[1] in illegal drug use and trafficking. While the state of California struggles[2] to pass judicial scrutiny, the big decreases in sentencing and prison time authorized[3] by Proposition 47 have gone into effect.

“Judges expect that tens of thousands of Californians may seek to have their felony convictions reduced,” reported[4] the Los Angeles Times. “Courts have had to scramble to handle the surge in workload, and some agencies are planning to ask for more public funding to cover the added duties.” In Long Beach, said[5] City Prosecutor Doug Haubert, the changes have approached “the point of absurdity.” In Humboldt County, claimed[6] ABC Channel 23, Prop. 47 created “havoc on the streets.”

Against that uneasy backdrop, criminals and wrongdoers involved in the illicit drug trade have begun gaming the system to appease judges, using technicalities and loopholes to supply the growing inmate and gang demand for hard drugs.

Earlier in the year it had become clear that many local jails were unprepared to handle the volume of incarcerated felons directed their way from state prisons by Brown’s “realignment” program. The Legislature passed some prison reforms, but these sometimes addressed challenges at the relative margins of the realignment problem.

In one instance, legislators sent to Brown a bill, AB966[7], that would eventually give free condoms to state prison inmates. Sexual activity in prison is not permitted by law, but HIV and AIDS have spread anyway. AB966, known as the Prisoner Protections for Family and Community Health Act, tasked the state Department of Corrections and Rehabilitation “to develop and institute a five-year plan to make the prophylactics available in all 34 麻将牌[8] of its adult prison facilities,” as UPI reported[9].

Now, county sheriffs have raised the alarm over the way drugs have widened the scope of realignment’s unintended consequences. In an Associated Press report[10], officials went on record that, in addition to bringing “tougher inmates to jails,” realignment has created an opportunity for offenders to use jails as a revolving door for the drug trade.

The culprit is “a provision allowing parole violators to serve 10 days in the local jail instead of months in prison.” This rule, dubbed “flash incarceration,” was “intended to give authorities a way to avoid sending parolees back to state prisons.” But, as AP reported, it has been “used by some offenders to bring drugs, hidden inside their bodies, into county jails,” according to state sheriffs’ offices.

Some uncertainty has arisen as to how the abuse is to be properly measured. While Adam Christianson, president of the California State Sheriff’s Association, called the drug spike a veritable “freight train,” AP noted counties could have an interest in playing up realignment’s adverse and unintended consequences, whether out of a desire for increased funding or decreased responsibility for adapting poorly to the state’s halting reforms.

Nevertheless, California officials cannot get around the fact that realignment has caused more unlawful activity, on pace to grow unless regulations change. Reform advocates had expressed enthusiasm last month that the Golden State had begun to turn the tide on incarceration, with voters approving Prop. 47’s downgrade of nonviolent felonies, including drug possession, to misdemeanors.

“As many as 10,000 people could be eligible for early release from state prisons, and it’s expected that courts will annually dispense around 40,000 fewer felony convictions,” observed[11] Matt Sledge at the Huffington Post, in a report characterizing Prop. 47 as a blow to prisons and the drug war.

Rather than a clear-cut victory against an out-of-control incarceration regime, however, California’s conflicting and competing criminal justice reforms could better be described as a policy target that keeps shifting in uncomfortable ways.

As the Los Angeles Times reported[12], the judiciary has kept the pressure on state officials to push even more felons out from behind bars. Federal judges gave the state until the new year to roll out parole hearings for second-time felons who have served half their prison time.