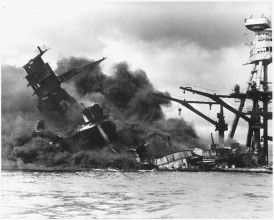 The Greatest Generation, now almost all passed into eternity, remembers where they were on Dec. 7, 1941, when the Japanese Navy attacked Pearl Harbor. Some of the survivors met earlier today at Pearl to remember their 2,400 comrades who fell that day.

For my late parents, who hailed from Detroit, my father remembered he was training with the U.S. Army in Louisiana and an officer announced it to the men. Pop had been drafted a couple months earlier, in March, and liked to say, “I joined for a year and got out five years later.” In those days, if you were in the military, you were in for the duration of the war.

Mom, certified a registered nurse a few months earlier, was driving somewhere with some friends and the news came on the car radio.

The war lasted almost four long years. It ended with the defeat of Hitler and the Japanese military dictatorship. Unfortunately, Stalin was left in control of the Soviet Union, most of Eastern Europe and most of China. A new book recounts how Stalin started the war with Hitler, “The Devils’ Alliance: Hitler’s Pact with Stalin, 1939-1941.”[1] 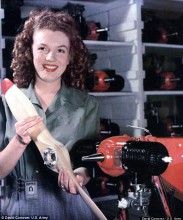 California played a crucial part in the war, not only as an embarkation point for the Pacific, a center for Navy bases, a farm cornucopia producing food for the GIs and a source of manpower. By 1941 California had become a manufacturing powerhouse, especially in the infant aviation industry. That’s where the young Marilyn Monroe (pictured at right) worked[2] before she got her break in pictures.

And of course, Hollywood joined the war effort big time. The great John Ford co-directed “December 7th[3],” still worth watching. It’s free online[4]. Of course, it’s propaganda, but even that’s instructive to see how the government wanted people to think. Ford was an officer in the Navy Reserve at the time. He was badly wounded a couple months later leading film intelligence crews at the Battle of Midway[5].

If you want to get a feel for how America was during the war, skip the horrible 2001 movie “Pearl Harbor.” Instead, check out “From Here to Eternity[6],” which centers around an Army unit just before and during the attack. The book it’s based on, by James Jones and his personal experiences, is even better.

Another of my favorites is Ford’s 1945 movie, “They Were Expendable[7],” about a P.T. boat crew in the Philippines during and after Pearl Harbor. Movies like that show the old-fashioned patriotism that animated America to victory.

So here’s a snappy salute to every World War II veteran, and Rosie the Riveter too.